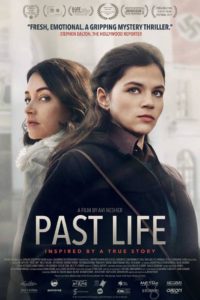 Israeli filmmaker Avi Nesher views himself as a psychiatrist for the State of Israel.

“Israel is completely overrun by the past,” he explained. “The Holocaust is part of everyday life. We seem to move forward as a country, but [the trauma] holds us back.”

In his films, Nesher openly explores Israel’s traumatic history with the goal of destigmatizing lasting feelings of guilt and anxiety. He calls the process “psychological treatment” for the nation.

His latest production, Past Life, continues the treatment plan.

The filmmaker wrote the screenplay as an adaption of Baruch Milch’s memoir, Can Heaven be Void? In the book, Milch recalls his time hiding in a Polish cellar, evading Nazi forces while losing his faith.

Milch’s daughters, played by Nelly Tagar and Joy Rieger in the film, are left to question their father’s past when a woman accuses him of murder. Doron Tavory and Evgenia Dodina round out the cast as Milch and his wife, Lusia, respectively.

The story spoke to Nesher because of his own ancestry. His parents were both Holocaust survivors, but their personal experiences remain a mystery to Nesher. He hoped to gain clarity through the film.

“I identified with the girls. [Making the film] showed me how little I knew about my parents’ lives. My mother is in her 90s, and this was the first time we had spoken about the war.”

Such silence is common in Israel, he said, perpetuating the cycle of trauma and grief.

Spoken like a true psychiatrist, he added, “We need to deal with it or we will not move on.”

The response to the film has been positive, Nesher said. The movie opened in December in Israel to widespread acclaim.

“It was a huge success. I was completely shocked,” Nesher said, noting he was unsure if Israelis were ready to talk about the Holocaust. With a chuckle, he added, “It did better than La La Land.”

The critical success of Past Life was buoyed by its world premiere at the 2016 Toronto International Film Festival, Nesher’s fourth film to be selected to the prestigious event.

The Ritz at the Bourse hosts Philadelphia’s June 9 premiere.

With a plot that spans multiple continents, the film alternates languages between Hebrew, English, German and Polish. Shooting was done in both Israel and Poland.

Born in Ramat Gan, Israel, Nesher moved to the U.S. at age 12. He graduated high school at 16 and attended Columbia University before serving in a special forces division of the Israel Defense Forces.

In 1978, he produced his first film, The Band, an Israeli box office hit that encouraged a long line of films to follow. Most of his subsequent works are set in an Israel of the past, with common themes of the struggle of young Israelis to understand Judaism and make peace with their elders’ often terrifying life experiences.

Perhaps that real-life terror led Nesher to venture briefly into the horror film genre. His work there includes a stint directing 1993’s Doppleganger, with Drew Barrymore as the lead.

Nesher has returned to documenting the past, which he said is a requisite for improving the future.

He plans two sequels for Past Life, though based on differing narratives. The proposed trilogy will unravel the different facets of the past’s grip on the present. Nesher is now working on Valley of Ghosts, the next movie in the series.

He chose a monumental year in Israeli history for Past Life, 1977. Egyptian President An-war Sadat brokered peace with Israel that year despite decades of unrest. The theme echoes throughout, as the characters struggle to accept the past and embrace their present.

“We either have to choose justice or choose life.”

He said Egypt and Israel chose life in 1977. Yet in today’s Israeli-Palestinian conflict, “both sides are choosing justice.”

If it were up to Nesher? He had an answer quickly: “I choose life.”