Tim Kolman insists his first play, The Roses in June, which runs from June 14 to July 1 at Plays and Players Theatre in Center City, isn’t really autobiographical — even though it deals with the adjustments Jewish children of the Kindertransport must make with their new lives in England, just like his parents did.

The 64-year-old Kolman, who later built his own law practice and married a rabbi’s daughter, said it would simply be too sad if this was his true-life story.

But he believes it’s too important a story not to be told.

“The Roses in June came together as a rare element of what I had experienced,” said Kolman, who spent six months writing the initial three-act draft, then nearly a year paring it down to two acts. “Though this is not autobiographical, it does have universal themes.

“The play deals with historical issues, the existential threat against Israel, the trauma of refugees, the theme of Jews fitting into Britain, the reaction of the British to anti-Semitism and also the friendships that some of the Brits have toward Jews.”

The story takes place in Britain just before the start of the Six-Day War and deals with George and Ingrid Rose, who were rescued from Germany after Kristallnacht. They’ve remade their lives, changed their name from Rosenberg and sent their son, Paul, to a highly regarded school where they’re confident he’ll fit in seamlessly.

Unfortunately, that fails to happen. 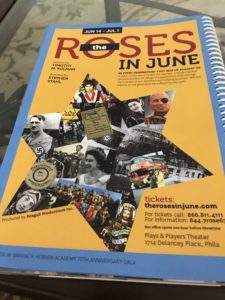 Paul is confronted with bullying and anti-Semitism, which the school attempts to cover up. That forces his parents to relive the nightmares of their youth while, at the same time, fearing the potential destruction of the Jewish homeland by Arab nations vowing to drive the Jews into the sea.

“The trauma of the refugee never completely goes away,” said Kolman, who came to the United States in 1980, after serving a year-and-a-half in the Israel Defense Forces, where his marksmanship skills earned him a spot on patrol when Egyptian President Anwar Sadat visited Israel to meet with then-Prime Minister Menachem Begin in 1977. “It’s always there.

“For the Jews who came to England or any refugee, they’re always betwixt and between. They’re not fully part of the country they came from, but they cannot fully integrate into the country that has received them.”

While the subject matter may be more than half a century old, it should still strike a familiar chord.

“It’s relevant now because when you insult someone online or do so from a podium or from your position as president, you don’t see the effect of the violence that can cause,” said Kolman, whose 91-year-old father, Ernest, will be coming from Ireland to see the production. “In this play, you get to see it.

“The parents cannot protect the son from some of same things they endured. The son attempts to protect the parents because he knows their vulnerability. At the same time, the school is trying to protect itself. And it builds in an organic way.”

“It’s a sprawling story, and Tim has done an astonishing job,” said Radway, who once was part of a remake of The Diary of Anne Frank. “It’s partly a memory play, a history play and perhaps a bit of a cautionary tale.

“Ultimately good stories are human stories. This play, as told through a Jewish family and a Jewish narrative, tells a story we’re all familiar with and we need to keep reminding ourselves of to make sure history does not repeat itself.”

Despite its heavy undertones, though, there’s enough lightness that Radway calls the play “hilarious,” while Kolman believes it ultimately delivers a message of hope.

“It is not a pessimistic play,” Kolman said. “It is an optimistic play. It deals with tragic events in great detail, but at the end of the day I believe people of good faith can get along with each other and need not be enemies.

“I’m hopeful that the play will validate that.”

He’s also hopeful his work demonstrates the need for Jews to understand their history as well as the customs behind their religion.

“No people memorialize their suffering and their triumphs more than the Jews,” said Kolman, who would often engage in such discourses with his late father-in-law, Rabbi Aaron Landes of Beth Sholom Congregation. “Passover is a festival of liberation, but it also deals with slavery. Chanukah is a festival of lights, but also about the persecutions by the Syrians and the Greeks.

“Yom Kippur memorializes the fact we are sinners and need to repent, but gives us absolution. And Rosh Hashanah gives us the promise of a new year and starts with 10 days of repentance.

“Jews memorialize themselves, but in doing so also establish their history. I don’t believe you can teach Judaism by dealing with it strictly through the ritual. You have to teach the history. It must come alive and be relevant today.”

“You don’t know how it will be perceived. I hope The Roses in June will bring the history of what happens to this family and its gravity alive and show its effect on a family that simply wants to be left alone to get on with its life in in peace.

“I hope people can find resonance.”