Although there was no accompanying article, the impending arrival in Philadelphia of President Franklin Delano Roosevelt to the Democratic National Convention merited a large front-page portrait on the cover of the June 26, 1936 Jewish Exponent.

The portrait is crowned by a headline of “A Distinguished Guest,” while the copy below mentions his renomination as president is scheduled “to-day.” 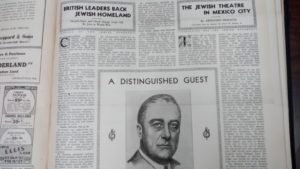 There may not be a story, but a brief editorial extols FDR’s first term.

“If in the years of his administration as Chief Executive he has succeeded in stimulating a measure of opposition to his economic and political theories he has been equally successful in gaining the admiration, in many instances even the affection, of the American people.  To all — Democrats, Republicans, Socialists, Independents, Non-partisans — he is the first citizen of the land,” the editorial said.

On the same page is an ad for Shoyer’s Restaurant at 412 Arch St., which welcomes delegates and touts “wines and liquors at reasonable prices.” Shoyer’s was founded in 1874 and lasted into the 1960s, according to the Historical Society of Philadelphia.

Aside from the FDR portrait, the front cover included a story about British leaders warning their peers that if Great Britain chose to withdraw from Palestine, violence would occur “from one end of the land to the other.”

A separate feature translated from Spanish focused on the Jewish theater scene in Mexico City.