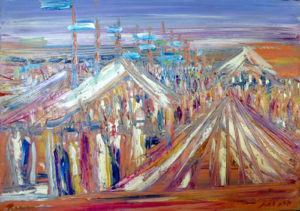 This Shabbat, my daughter Rosie will be called to the Torah as a Bat Mitzvah. For many months now, we’ve logged a lot of hours poring over Bamidbar’s words together. The following are snippets of our conversations; Rosie really did have all the funny lines in those discussions.

David: Hey Rosie, let’s sit down and read your parshah together; I think you’ll find it interesting.

Rosie: Abba, what’s interesting about completely repetitive lists of names, camp formations and numbers that don’t add up? I guess they call this book Numbers for a reason.

David: I bet if we dig a little deeper, we’ll find plenty of ideas that will excite you.

Rosie: You always say that; you’re a rabbi after all.

David: True, but humor me; there’s half a chance that I’m right on this one.

In the end, we sat together, discovered quite a few animating concepts and came to realize that all the names, notations and numbers actually tell important stories.

Rosie: So Abba, I don’t get the opening verse of my parshah. First it says that God spoke to Moses bamidbar sinai — in the wilderness of Sinai — and then, in the very next phrase, it says b’ohel moed — in the tent of meeting. Which is it? Where do Moses and God get to talk to each other?

David: Looks like it’s both. The tent, after all, gets assembled and disassembled throughout the Israelites’ journey in the wilderness of Sinai. That’s kind of obvious though, don’t you think? The only place the tent can be is in Sinai. Maybe the Torah means to tell us something by mentioning both places.

Rosie: There you go again, rabbi. It would be nice if the Torah just said what it meant.

David: You know, most of your favorite books have more than one possible meaning. Think about how every detail in Harry Potter matters in some way.

Rosie: OK, OK. So why the two place names?

David: The midbar is a big, wide-open space, pretty public. Things that happen there, words spoken there, are seen and heard by everyone. The ohel, in contrast, is intimate and private; only Moses gets to hear what God has to say there. The opening sentence of the book offers us a clue; keep an eye on the difference between what gets said in public and what gets said in private.

Rosie: Right. So for Moses to be a good leader, he has to make sure that the messages all match up? Is that the point?

Rosie: Don’t they call that transparency, or something like that?

David: Exactly. Lots to learn from one throwaway verse.

This insight led to lots of discussion about leaders and leadership, spurred on by a lovely Baal Shem Tov teaching (Sefer Toldot Yaakov Yosef, Ki Tetze) that calls for an aligning of one’s heart and one’s mouth, another version of the distinction between the tent and wilderness. Too many of our leaders, in Rosie’s judgment, fail that test. I couldn’t really argue. Another hot topic in Bamidbar is the question of the banners or standards held aloft by each of the tribes when in formation during the desert journey. What are these flags and what do they mean?

David: Rosie, I’m thinking that the whole people of Israel encamped in formation must have been quite a sight. Very colorful and very impressive.

Rosie: It feels kind of like a big Quidditch tournament, with the banners and flags, every tribe with its own colors. I assume they each had their own standards, no?

David: They did, I think. The Midrash (Bamidbar Rabbah 2:7) connects the flags to the different colored stones on the high priest’s breastplate. Twelve stones symbolizing 12 tribes, each a different color. Other Midrashim suggest specific symbols for each tribe’s flag, some of them mentioned in Jacob’s blessings for each of his children who became the heads of the tribes. There’s even an idea that every family had its own flag or standard. What if our family had a flag? What would you put on it? And what color would it be?

Rosie: For starters it would have to be teal, which you know is my favorite color. I think maybe I’d put an image of a book with eyeglasses lying on top of it since we’re a pretty bookish group, and we all wear glasses. Also a map of Israel and the U.S. maybe; some of us live here and some there. And, finally, a picture of the five of us next to the lake at Ramah in the Poconos. What do you think?

David: I love it. Let me toss one more Midrash your way. Bamidbar Rabbah 2:3 puts it this way: “Holy and grand were Israel beneath their banners! All the nations looked at them with rapt attention and wonder, thinking, ‘Who is she that shines through like the dawn, beautiful as the moon, radiant as the sun, awesome as bannered hosts’? (Song of Songs 6:10).”

The flags express grandeur, they command attention. And they connect with the beauty of the world around us. Ema and I said those same words from Song of Songs to you at your baby naming 12-and-a-half years ago. I can’t wait to say them to you again this Shabbat at your Bat Mitzvah. Mazel tov, Rosie. Wave your flag wide and high.

Rabbi David Ackerman is the spiritual leader of Congregation Beth Am Israel in Penn Valley. Rosie Ackerman is a sixth-grader at Jack M. Barrack Hebrew Academy in Bryn Mawr. The Board of Rabbis of Greater Philadelphia is proud to provide the Torah commentary for the Jewish Exponent.