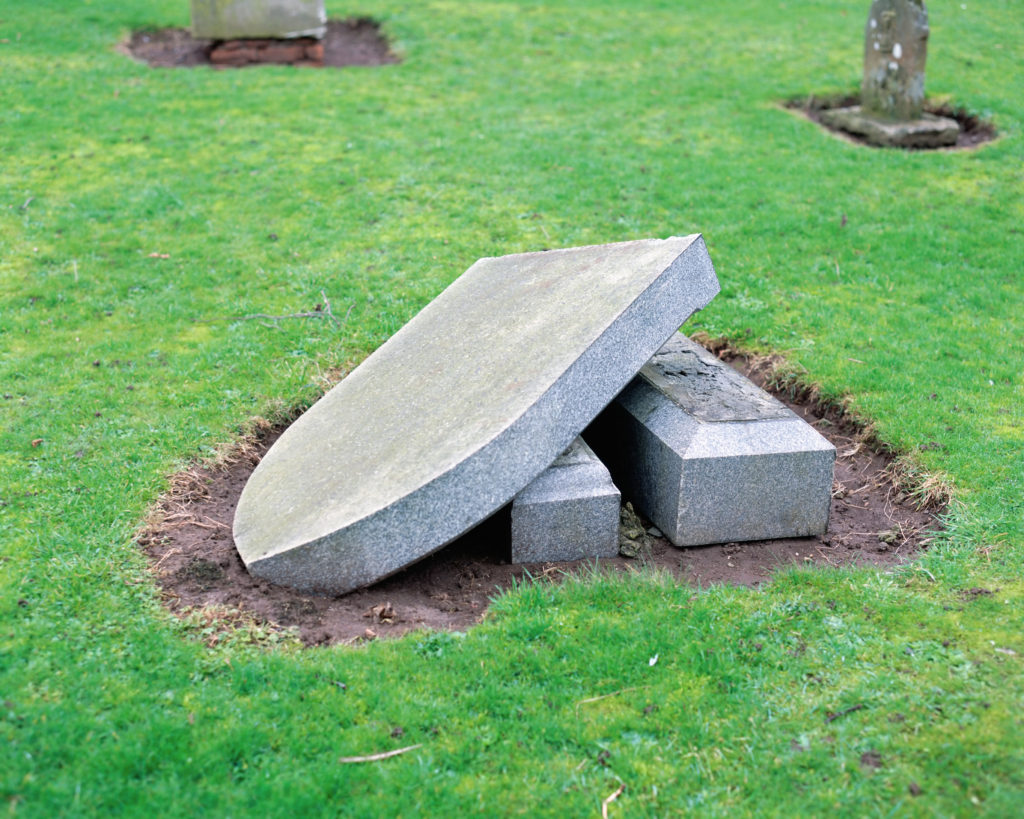 On the heels of the nationally reported February vandalism at Mount Carmel Cemetery in which more than 100 tombstones were knocked over, Philadelphia police received a call May 16 about five overturned headstones at Adath Jeshurun Cemetery in Frankford.

In addition, anti-Semitic graffiti was discovered the same day in Horsham.

Shortly before 1 p.m., a groundskeeper notified Philadelphia Police Lt. Dennis Rosenbaum about the toppled headstones on the north side of the cemetery on Bridge Street.

No graffiti or markings were reported. Rosenbaum said another two headstones looked like the perpetrator(s) tried to knock them over but were unsuccessful.

“It was the Jewish section of the cemetery and obviously with the incident that happened at Mount Carmel, the groundskeeper was concerned right away and gave us a call,” Rosenbaum said.

Adath Jeshurun President Bruce Armon was happy to note that all of the headstones have been replaced back to their rightful position as of the afternoon of May 17.

“The police have been very helpful and cooperative and proactive, and I’m pleased to say our groundskeeper has repaired the headstones today and the congregation is looking forward to moving forward,” he said.

The families of the affected tombstones had been notified of the vandalism and of the repairs.

This isn’t the first time the cemetery has been the target of vandalism. In late July 2015, a reported 124 tombstones were desecrated.

As of now, there is no surveillance at the cemetery and, for the future, Armon said they are looking at possible precautions.

“When any of these circumstances happen, we’re going to evaluate what makes the most sense so we can make sure that the cemetery remains sacred ground and take what reasonable protections we think are appropriate,” he said. “We will certainly be considering what the appropriate next steps should be.”

Meantime, the community’s response has been a positive one and he is looking to move forward.

“It’s certainly very disappointing when you have any cemetery of any denomination have something like that occur,” he said. “The feedback from our community has been very positive and supportive not only within our congregation but the general community, which we’re certainly very appreciative of.”

Rosenbaum said police have retrieved video from residential neighbors who have their own security cameras and are hoping to “get lucky and catch something.”

“The crime scene unit processed the scene yesterday for forensic evidence, so we’ll wait to see if anything comes back on that,” he added.

The north side of the cemetery also has a gate often used as a shortcut, he said, so they are looking out for “anybody suspicious walking by or heading in that direction or coming from that direction.”

“We don’t know if it was kids or if it was intentionally done,” he noted. “The cemetery is open so even yesterday when we were out there, people were out there using it as a shortcut so that’s what we’re trying to figure out.”

Also on May 16, over in Horsham, as Jill Zipin was scrolling through her Facebook feed, she saw an image that caught her eye — and not in a good way.

The picture depicted several markings including “Trump Rules,” a triangle featuring “KKK” as well as a scribbled swastika accompanied by the messages “1488” and “White Power.”

The Anti-Defamation League characterizes “1488” as a hate symbol combining two popular white supremacist numeric symbols: the 14 is shorthand for the “14 Word” slogan (“We must secure the existence of our people and a future for white children”) and the 88 stands for “Heil Hitler,” per the ADL website.

The triangle symbol itself is also a hate symbol, per the ADL.

It “consists of what looks like a triangle within a triangle but which actually represents three letter K’s aligned in a triangle and facing inwards,” the website says. “This is an old Ku Klux Klan symbol that has been resurrected by modern-day Ku Klux Klan groups.”

Zipin said she contacted the police as well as the ADL after first seeing the image on Facebook.

“The ADL was notified of both the graffiti found in Horsham as well as the cemetery desecration,” said Nancy Baron-Baer, ADL regional director. “In each of the cases, we immediately spoke with the police department and are keeping an active eye on both situations.”

Of the nature of the Horsham graffiti, “one can take from this that the individual who scrawled the graffiti on the pole knew what they were doing and has an understanding of white supremacy,” Baron-Baer added.

It is an active investigation and the police are taking it seriously, said Horsham Township Police Lieutenant John Potts.

This incident comes just days after Upper Dublin Township said it was investigating a series of fliers promoting the Ku Klux Klan in Maple Glen. In February, the same fliers, reading “Love Your Own Race!” in a heart, were found in Doylestown.

“It’s very distressing as a Jew in 2017 to see the Klan and anti-Semitic hatred visible,” Zipin said. “It’s sad, it’s disheartening, it’s scary and it’s nothing that anyone wants to see where they live.”

In response to these incidents, Wissahickon Faith Community Association organized a vigil called “Light in the Darkness: Standing Together” to be held May 25.

When the flyering in Upper Dublin occurred, Zipin reached out to her synagogue, Congregation Beth Or, about it as well as the graffiti in Horsham. The synagogue has a social justice group, she noted, and is part of the Wissahickon Faith Community.

“We thought it would be important to have a community event that shows we all love one another and that this kind of behavior is not tolerated,” she said, “no matter what one’s religion, race or belief.”

Both investigations are ongoing.