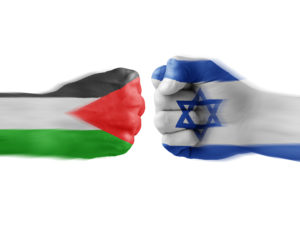 The Foreign Policy Research Institute (FPRI), a Philadelphia-based think tank, hosted Maen Rashid Areikat, the Palestine Liberation Organization (PLO) representative to the United States, for nearly an hour-long conversation filled with a mix of lies, outrageous statements and dodges — and Areikat’s declaration that no Jews will be allowed to live in a state of “Palestine.”

The event was dubbed “The Future of Israel and Palestine,” though strangely no one from the Israeli government — or any Israeli — was part of the discussion.

FPRI President Alan Luxenberg, Areikat’s conversation partner, was indifferent to the PLO official’s demand that Jews be ethnically cleansed from Judea, Samaria and eastern Jerusalem — where more than 600,000 Jews now live. Jews no longer live in the Hamas-controlled Gaza Strip. Many see these areas as Phase 1 and Phase 2 of Yasser Arafat’s “Phase Plan” to gobble up Israeli territory through diplomacy that the Arabs were unable to capture through wars, and to use newly gained areas to continue to try to destroy the Jewish state.

At times, it was hard to tell what part of the FPRI event was the most appalling: Areikat’s rhetoric, Luxenberg’s nonchalance, the staid FPRI audience’s impassiveness (though applauding at the end) or National Liberty Museum President Gwen Borowsky’s assertion that the Liberty Museum was an “appropriate” setting for such an event.

Some of Areikat’s pronouncements: Israelis, not the Palestinian-Arabs, officially incite violence; Hamas is not an anti-Semitic organization because after all, Arabs are Semites, too; the Palestinians have taken “bold moves” for peace while the Israelis have been intransigent; the Arabs have taken steps to prepare their people for peace; the conflict has nothing whatsoever to do with religion; and Israel has used “excessive and disproportionate force” in trying to control terrorism.

While a couple times Luxenberg asked Areikat probing questions, such as: What three things were Palestinians willing to do to gain the trust of Israelis, Areikat sidestepped addressing the questions and the FPRI official did not press for an answer. Luxenberg failed to challenge any of Areikat’s lies — including the doozy that Hamas is not anti-Jewish — nor did he inquire what would happen to the Jews that Areikat insisted cannot live in Palestine.

Meanwhile, a liberty museum seemed like a strange place to host a representative of a regime that denies liberty to its own people. The PLO, under the guise of the Palestinian Authority, fully controls Area A and has civilian control over Area B — which combined are 40 percent of the land of the so-called West Bank. It has not permitted an election since 2006, and Mahmoud Abbas, its head, is in the 13th year of a four-year term. The PLO/PA controls the media, schools and mosques in the territories. Political opponents are reportedly imprisoned and tortured.

The PLO has murdered many Americans and Jews, and it pays $300 million each year in salaries to those who have murdered and attempted to murder Jews in a “pay to slay” program.

Imams on the PA/PLO payroll regularly refer to Jews as descendants of apes and pigs, and in 2015, to incite violence against Jews, Abbas said, according to the Middle East Media Research Institute, “The Al-Aqsa Mosque and the Church of the Holy Sepulcher are ours. They are all ours, and they [Jews] have no right to defile them with their filthy feet.” Abbas added: “We salute every drop of blood spilled for the sake of Jerusalem.”

The address was aired on the official Palestinian Authority TV channel.

The United States designated the PLO as a terror group in 1987 and banned the group from having an office in the United States. The only reason they have an office in Washington today is because President Clinton signed a waiver in 1994. None of the above seemed to bother FPRI or the museum.

For most of the event, Areikat, who uses the title “ambassador,” was calm, silver-tongued and personable — until two Zionist Organization of America (ZOA) members’ questions revealed a different side.

He lost his temper at the mere mention of “Judea and Samaria” and went on a tirade when asked about Hamas. He further showed anger when asked why Arabs can comprise 20 percent of Israel’s population and yet the PLO/PA will not permit any Jews to live in a judenrein Palestine.

That Luxenberg let Areikat get away with murder — murder of the truth — was appalling. “I don’t see anything in Hamas’ political doctrine that directly say that they are anti-Jewish” was one of the PLO official’s claims. Its genocidal charter says otherwise.

Other than the ZOA members, no one in the audience seemed fazed by Areikat’s racism, outlandish claims and refusal to admit to any Arab blame for a lack of peace.

Reputable groups and museums should not give platforms, credibility and a hechsher to groups that have murdered Americans and Jews, and that regularly incite violence and hatred. Israeli officials are forced to sit across negotiating tables from such fiends. That is not the case for FPRI and the National Liberty Museum.

If groups do choose to host or feature the PLO and similar groups, at minimum the lies need to be exposed and challenged and the audience must be made aware of the background of the speaker and his or her organization.

Such programs need balance — particularly when one side has a clear record of lying. Otherwise a dialogue merely becomes a propaganda exercise. It is, at the least, hoped that an Israeli government official be invited to a future program.

Steve Feldman is executive director and Lee Bender and Kevin Ross are co-presidents of the Zionist Organization of America: Greater Philadelphia.