Today, as Jewish community members living in Greater Philadelphia, we have hundreds of ways every hour to receive news related to our lives as Jews. One hundred and thirty years ago, for Jewish families who lived here, there was one way, once a week, to receive Jewish news: the Jewish Exponent.

Imagine how much the Exponent meant to our ancestors, many of them new to the country. The paper was, on a basic level, a source of news directly related to their lives and livelihoods. It was an opportunity to learn about Jewish businesses, and promote their own.

Back in 1887, at a time when anti-Semitism was public and pervasive, the paper also grew to become a source of comfort — something that united community members and gave them a way to celebrate their culture and heritage. Similarly, it was an important force for exposing the harm caused by hatred and inequality.

The paper also educated and mobilized people on behalf of Jewish peoplehood. For instance, it informed Greater Philadelphia readers about the Zionist movement, and inspired them to support the efforts being undertaken to establish a Jewish state. I believe the Exponent played a key role in identifying and reducing bigotry, and in establishing the State of Israel.

Since the Jewish Federation of Greater Philadelphia was founded in 1901, we have partnered closely with the Exponent. In many ways, our work aligns perfectly. At the Jewish Federation, we, too, bring the community together to learn about and take action during the most difficult times locally and in Israel. We work to connect community members to one another and to our shared heritage. We strive each day to build a more welcoming, inclusive and just society.

While we share similar goals, we are separate entities. I am frequently asked, “Doesn’t the Jewish Federation decide what to put in the paper?” The short answer is, “No.” We publish the paper, via the Jewish Publishing Group. We do not choose what to publish or not publish. This is the role of the editorial staff. We know for the paper to continue to be an effective platform for delivering Jewish information and stimulating community dialogue, we must leave the content development to the Exponent professionals.

This award-winning newspaper has played a vital role in connecting our community since it first rolled off the presses on April 15, 1887. It is the second-oldest continuously published Jewish newspaper in the United States. While much of this success is due to its excellent content, there is another element driving the paper’s success: community support.

From day one, the Jewish community was deeply involved in the Exponent. It takes a community of caring people who are reading and responding to the content — from articles and editorials to ads and life cycle announcements — for a paper to work. Thanks to the tens of thousands of people through the decades who have been asking for or creating the highest-quality content, the Exponent has remained a newspaper for the people, and by the people.

Though times have changed and the Exponent has evolved, it has always remained relevant. Today, whether people are reading it on their phones or in their living room chairs, the Exponent continues to be an invaluable resource for each of us. On this special anniversary, I thank the Jewish Exponent for the news and comfort it has provided to us. Most of all, I thank you, our community members, for ensuring this wonderful resource could survive, and thrive, for 130 years.

Bud Newman is the president of the Jewish Federation of Greater Philadelphia. 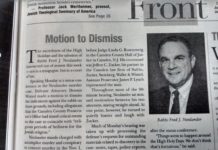 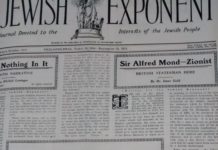 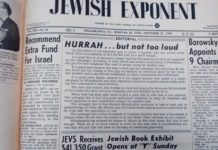