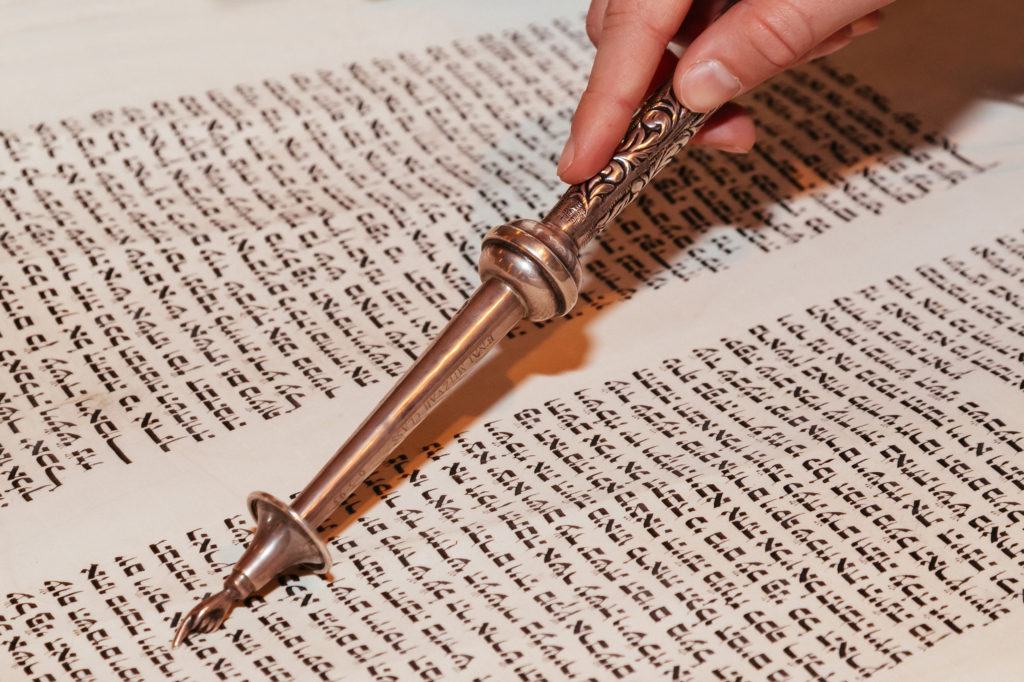 When Andrea Shuster was growing up, few women in her family had a Bat Mitzvah.

Two cousins did, she recalled, but her aunts? No. Grandmother? No. Mother? No.

Shuster was given the choice between a Bat Mitzvah or a sweet 16 — she chose the latter.

“It just really wasn’t something that was encouraged growing up in my family because it was usually all the men at that time,” recalled the 43-year-old. “We were raised Conservative and it wasn’t a huge, big thing back then, so if the girls didn’t really want do it they didn’t push it.”

On March 11, she joined seven other women on the bimah as they became B’not Mitzvahs at Congregation Rodeph Shalom.

Adult Bar and Bat Mitzvahs are not uncommon.

In Shuster’s group, which ranged from women in their 20s to their 70s, there were those who converted and wanted to have a Bat Mitzvah now and those who may have been like Shuster and didn’t feel a strong desire to have one when they were 13.

Doing the ceremony now has made it more meaningful for Shuster, who grew up in Northeast Philadelphia and attended Ner Zedek off and on.

“It’s been refreshing [and] enlightening,” she said. “Since I’m older, I’m retaining it more, and I’m appreciating it at this age. Learning the Hebrew was really tough, I’ll be honest, but it’s been a great experience. Now I can read the prayer book and the Torah, which is awesome.”

While Rodeph Shalom has been offering adult Bar or Bat Mitzvah classes for at least 15 or 20 years, executive clergy assistant Candice Nemoff said this is the first B’not Mitzvah she’s aware of.

If there were a man in the group, it would follow the masculine laws of Hebrew and be called a B’nai Mitzvah.

“Last year, we had one guy and then there were a few other girls, but as long as there’s one guy it’s masculine because [of patriarchy],” laughed Nemoff.

The women met monthly for an hour and a half with Rabbi Jill Maderer to learn about the Torah and the blessings they performed together during Saturday’s service.

While none of them planned any big parties afterward with a DJ and seemingly endless rounds of Coke or Pepsi, there was a luncheon for the new Bat Mitzvahs and their friends and family. They received mezuzahs and Kiddush cups engraved with their initials and the date as gifts, as well.

The opportunity to become a Bat Mitzvah even when one is already bogged down with the bills and trappings of being an adult is still just as meaningful.

They read three sentences each from the Torah and led chants and blessings during the service, which Shuster was looking forward to doing.

“The feeling of learning how to read Hebrew and the Torah and have the opportunity just to read the Torah is just amazing,” she said. “The first time I practiced, it was really awesome. That feeling that you know from … a long, long time ago, they wrote this and now you can read it — it’s just the coolest thing.”

Her family helped her prepare for her big day. Her 14-year-old daughter, Lindsay, who also became a Bat Mitzvah at Rodeph Shalom, has helped her get ready for her time on the bimah, and her parents bought her her first tallit.

“I’m looking forward to just getting up and reading the Torah in front of everyone, putting on a tallit for the first time,” she said. “I never thought to get one and because I’m reading from the Torah, I thought that I should have one.”

Having a Bat Mitzvah was something Jenni Russell wanted to do for herself.

Growing up in South Jersey, Russell grew up around a large Jewish population — but until 2007, was not Jewish herself.

“It’s something that I’ve always wanted to do,” said Russell, 35.

After she converted and started going to Rodeph Shalom around 2011 after moving to the Philadelphia area, she heard about its Bar/Bat Mitzvah class and decided to join.

As a religion minor in college, she’d learned about Judaism and the Torah. But getting to hear other takes from the women in her class and studying with the rabbi allowed her to hear new perspectives.

“Our group is a very intergenerational group, and people came with all different experiences in terms of academic study, religious study,” she said. “For me, the most interesting part about it was studying with them and learning from all these other people of different backgrounds.

On Wednesday morning, the day after their final meeting before the ceremony, Russell — as any pre-Bar or Bat Mitzvah would surely relate to — was feeling a mix of excitement and nerves. The idea of reading the Torah in front of a large group of people and singing was a little scary, she said.

“While I’ve been studying and preparing a lot, I’m still very nervous about it. So I’m looking forward to having had the experience and it being over and not being slightly terrified by trying to read Hebrew in front of a room full of people,” she laughed. “I am looking forward to being able to actually read text from the Torah scroll itself.”

Public speaking doesn’t scare her, but she admitted “it’s a little different when you have do it in a language you’re not necessarily accustomed to.”

For her, being a part of the B’not Mitzvah had special meaning.

“Being someone who doesn’t grow up with the shared experiences that everyone else has, you can sometimes feel a little bit left out of the conversation,” she said. “You’re not able to relate or talk about certain things, and so in one respect this was a way to have that experience — granted, not the same as doing it as a teenager, but still having gone through that process of studying and learning and doing this in front of a big group of people. All around it’s just been such a fantastic and wonderful experience.”