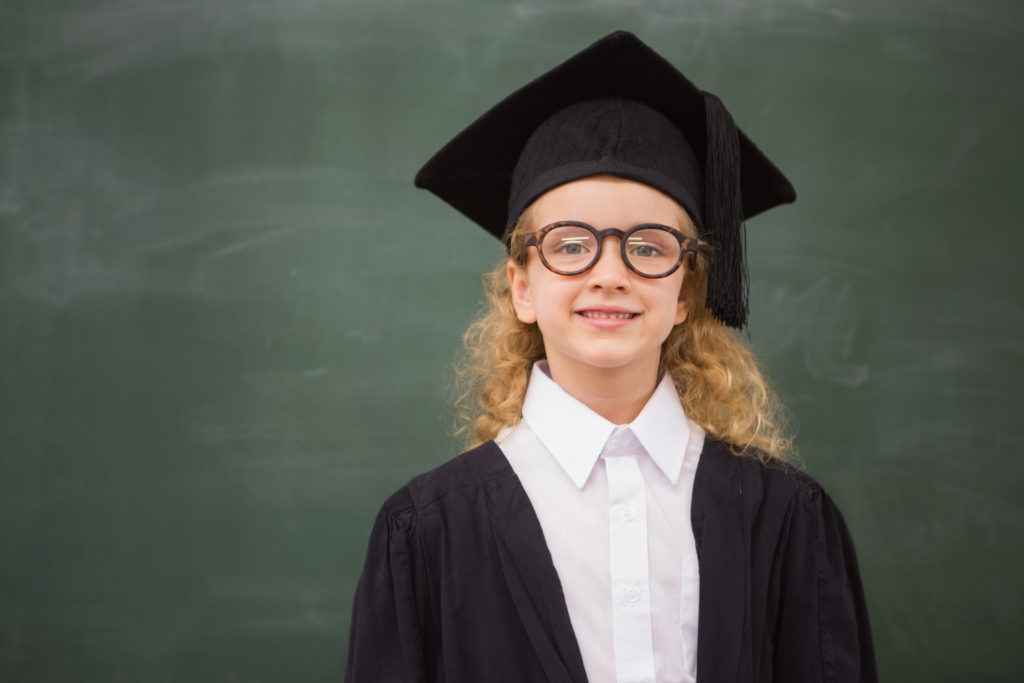 If you’re middle-aged or older, the idea of making a big deal out of graduating from something other than high school, college or graduate school may seem to be a relatively recent one.

Rhyme University Inc. began selling diplomas for kindergarteners in 1954. The St. Paul, Minn., company has since expanded its product line to include caps and gowns, among other things. It also has increased the occasions for which it makes products; those now include graduations from preschool and Head Start programs.

With many elementary and middle schools also having jumped on the graduation-ceremony bandwagon, parents who like throwing parties to celebrate their children’s academic rites of passage now have more rites of passage than ever to choose from.

How many they choose to celebrate is an economic indicator of sorts, according to Adam Weitz, who started Southampton, Pa.-based A Sharp Production 20 years ago as a disc jockey and live entertainment company.

“The milestone events will always be there, but the fun little parties that people like to have, like fifth-grade graduations, depend on the economy,” Weitz said.

Even when people feel economically secure enough to throw non-milestone graduation parties for their children, they don’t spend too much money on them.

“I haven’t really had a crazy under-high school graduation,” said Jennifer Lawn, who has been in the event business since 1996 and had her own company, JL Original Designs, since 2011.

For preschool or kindergarten graduations, Lawn said, parents might hire her company, which does decorations, and a caterer, get a bounce house for their backyard and have a picnic.

“Parents just really want to do something that fits their child’s personality,” she said.

They also want to do something that’s family-oriented.

Celebrations of graduations prior to high school typically feature the graduate’s immediate family, perhaps a few members of their extended family and then their closest friends, said Karen Pecora of Philadelphia Events.

Elementary and middle school graduations, she said, are typically thrown at the graduate’s home and are casual, fun events. Since the graduations occur in late spring, they’re usually outdoors and often around a pool, if the graduate’s parents have one.

Preschool and kindergarten graduation celebrations, she said, are often lunches with parents, grandparents and other relatives, and can be more formal.

“You see preschool graduations and kindergarten graduations where everybody’s dressed to the nines,” she said.

That can make for memorable occasions, but the adults likely will be the ones who remember them best.

“Are [the children] going to remember them 20 years from now? Probably not,” Pecora said. “It’s more for the family than it is for the child.”

Graduations aren’t the only events featuring kindergarteners in their best.

“It’s just like a little high school prom, but it’s for the little kids,” she said. “They get dressed up and everything.”

That may seem like overkill, as may a party to celebrate children graduating from preschool or kindergarten, which is why not everyone does it.

EBE will help with any party that anyone is willing to throw, but Tara Buchanan, its lighting and production director/event planner, said no one has hired it for preschool or kindergarten graduations as far as she knows.

The Philadelphia company has worked on elementary and middle school graduation parties. For those, Buchanan suggests getting such games as foosball or arcade basketball and/or hiring a disc jockey.

Brian Smith, whose Platinum Disc Jockeys & Photo Booths is based in Collegeville, hasn’t worked a party celebrating any graduations beneath high school in his more than 25 years as a DJ. He said the first milestone events he does are mitzvahs, followed by sweet 16 parties.

“Anything younger than that, the traditional outlet has been a BounceU, a Chuck E. Cheese or something small in their backyard for family members,” he said.

A growing problem Smith has noticed at the parties, dances and mitzvahs he does is that the young attendees need something more than just music to hold their attention. When he’s just playing records and nothing else is going on, they’re glued to their smartphones.

“They’re not disconnected [from their phones] very long unless you’ve got something to keep their attention,” he said.

Andrew Scharff, a clown, comic and juggler from Philadelphia’s Belmont Village section (although he now lives in South Philadelphia), also hasn’t done any parties to celebrate graduations lower than high school. He did perform at one such graduation though — in El Salvador on his Clown the World trip.

Scharff said he studied at clown college and then spent nine years performing in circuses in the United States, in Europe and in Japan. He followed that up with six years as a juggler and comedian on cruise ships. He has performed in China six times and before one pope — John Paul II.

His Clown the World trip combined charity with tourism, as he performed at schools, orphanages and homes for the elderly in places he always wanted to see, with his girlfriend along to document the experience on video.

“I’ve enjoyed working in the circuses and on the cruise ships, and those have been great jobs, but I just wanted to go to even more places and I realized I wasn’t going to find a paying gig in Guatemala,” he said.

Merida Alexander said that although her Morrisville-based firm, Events by Merida, hasn’t been asked to plan parties specifically to celebrate middle school graduations, it has done some birthday parties that happened around the time the guest of honor graduated from middle school and were made a little more elaborate as a result.

And, while some people consider celebrating graduations of elementary and middle school to be the equivalent of giving out participation trophies for academic achievement, Alexander isn’t among them.

“It’s fun for the kids, they feel like they’ve accomplished something and as much as it may seem silly, if it encourages kids to enjoy education … I don’t think it can be looked down upon,” she said.