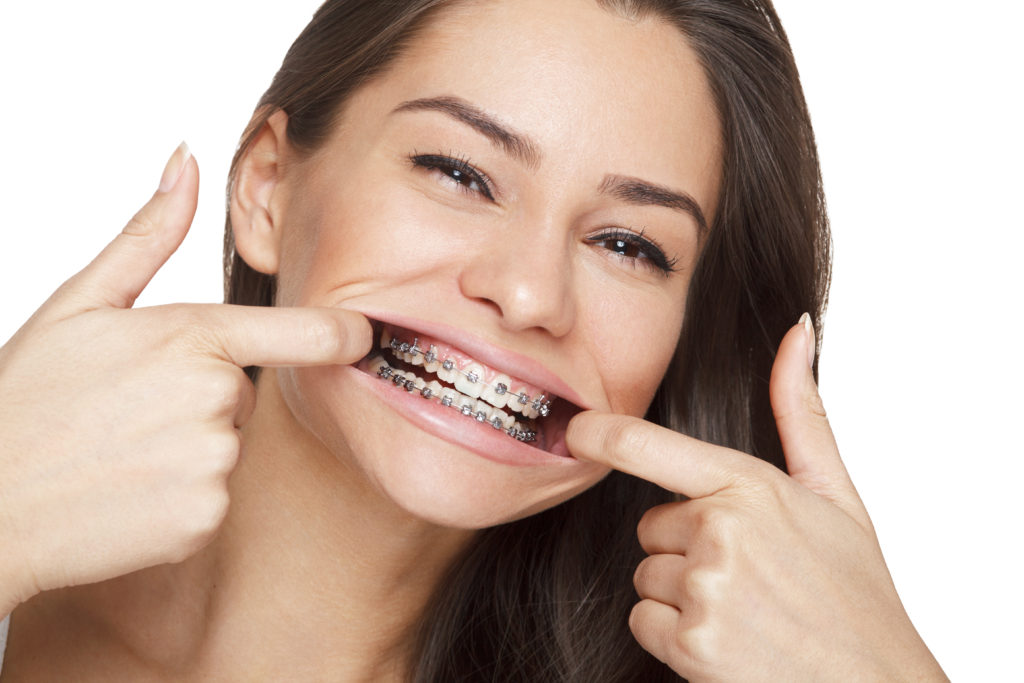 There’s nothing quite like the combination of puberty and peaking in Jewish adulthood: You walk up to the pulpit, prep to pronounce prayers from the Torah, then suddenly pause to pull leftover bagel from your braces.

Avoiding casualties like this one are what prompts many preteens to get their braces removed for their Bar or Bat Mitzvah, then get them put back on after the big day.

In this reporter’s day, getting braces was in itself a rite of passage: You could choose which rubber band colors to get on the metal brackets to match holidays, or choose clear bands in an attempt to make the metal invisible (though it really just made your teeth look bulgier).

Looking back at my own Bat Mitzvah photos, I made the wise decision of picking turquoise rubber bands to match my teal BCBG dress, which also matched the fake blue flowers I held in a photo shoot that my brother took in our backyard. There may or may not have been blue eye shadow involved. (I just really, really liked blue, OK?)

Nostalgia aside, braces have served a purpose in one form or another dating all the way back to ancient Egypt.

According to Colgate, archaeologists have uncovered mummies with metal bands around their teeth, and catgut — a type of cord made from fibers found in animal intestines — tied to the bands to provide pressure and move the teeth.

As braces nowadays require more than 40 days and 40 nights to properly see results, why is braces removal all the rage?

Getting your mouth full of metal removed (did anyone else pick up static, or was that just me?) to appear more photogenic during one’s Bar or Bat Mitzvah is not unlike putting “flippers” — expensive faux teeth — on toddlers in children’s pageants to make them seem more mature. But that process is less involved. The question for B’nai Mitzvah: Is it worth it?

“Usually when we go over the pros and the cons with the patient and the parent, usually the cons outweigh the pros,” said Vanessa Wang, an orthodontist with Narberth Dental Group.

While some choose to stay the course of treatment, others go for the removal. (This is true of brides and grooms, too, she said.)

If Wang knows early on in the consultation that there is a big event coming up, she tries to steer them toward something more inconspicuous like Invisalign.

“That is much easier to take a break from,” she said. “But taking the braces off in the middle of treatment might be something that might end up creating more disadvantage than there is benefit. We will do it if it is truly what is requested, but we just have to be thorough with what some of the consequences could be.”

“These pictures are going to be memorabilia for a lifetime, and for other people it’s, ‘Oh, little Johnny can’t read or sing with those in his mouth,’” she said. “So I’ve had requests either due to aesthetics or due to being able to perform the functions of singing or reading in front of people during a Bar or Bat Mitzvah.”

Teeth can shift in the limbo between braces and bare teeth, and the excessive removals can hurt the enamel. Otherwise, Wang said the procedures are relatively straightforward, and transitional retainers are used as a middleman.

“The longer you go on vacations from your braces, basically it delays the process of finishing in a timely manner,” she noted.

Another big issue Wang has discovered: persuading kids to get the braces back on.

“It’s that sweet freedom,” she laughed.

But a happy medium between that sweet freedom and full-on metal mouth include advancements like Invisalign, according to Sherri Middleberg, office manager of Orthodontics Limited, PC in Northeast Philadelphia.

Both braces and Invisalign are worn 24/7, but Invisalign is taken out to brush teeth or eat, so the overall treatment is slightly less time than braces.

“It’s not happening as much maybe because braces are a rite of passage at that age and it’s more acceptable. It’s not such a bad thing to have braces,” she noted.

Middleberg said all three of her now-grown children went through braces, though she had to look up at their Bar and Bat Mitzvah photos in her office to recall if they had braces during those times (they didn’t).

“It’s a personal preference,” she added, “because these pictures are like a wedding picture. It’s something that you’re going to hang up or look at for many years until the next milestone.”

Orthodontics Limited will remove braces and replace them for the occasion free of charge — they are usually off for about a week, she said — and since orthodontics has come a long way since the ancient Egyptians, the pain now is nonexistent.

“It’s just a matter of a little bit of glue and then there’s a curing light — once it shines on the glue, it hardens, so it’s not like the old days where you had to cap each tooth with a band,” she explained.

For Bar or Bat Mitzvah kids who keep the braces on, many choose to get those colored rubber bands to match their party theme.

“If their cake and their decorations are red and pink, maybe a girl would want red and pink elastics,” she said. She’s seen preteens do the same to match their school colors, sports teams or holidays.

“We see kids from 6, 7 years old to 70 years old — the whole range,” Middleberg added. “We’ve done mothers and daughters and fathers and sons — any combination of family at the same time.”

Regardless of older generations who endured the old-school sets of braces or even — shudder — headgear, it’s your prerogative to embrace the present with or without braces for the big day on the bimah. Either way, it will be something memorable to look back on.

One personal tip, though: Please stay away from the blue eye shadow.