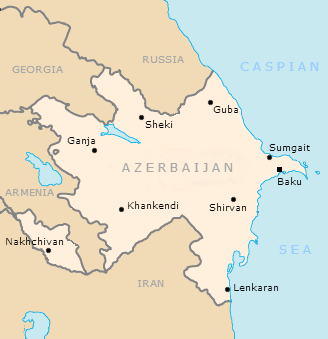 I was a participant on a 34-member Muslim and Jewish women’s bridge-building delegation last week to the Republic of Azerbaijan sponsored by the Sisterhood of Salaam Shalom. Azerbaijan was chosen because it is a Muslim nation that respects different faiths and treats them with genuine friendship and acceptance. Our group sought to learn from the Azeri people about their open-mindedness towards religion and peaceful coexistence.

The delegation was the first Muslim/Jewish women’s venture of its kind. We were greeted with enthusiasm and had a multitude of private meetings with dignitaries and officials including the American ambassador to Azerbaijan, Robert Cekuta; Chairwoman of the State Committee for Family and Women Hirhran Huseynova; and Chairman of the State Committee on Religion Mubariz Gurbanli, as well as a meeting with Gamarkanim Javadi, the deputy chair of the Caucasian Muslim Board who is the only woman deputy of Sheykulislam in the Muslim world.

Among the principal topics discussed were women’s economic and social conditions, coexistence among diverse religious groups, energy development, ties between Azerbaijan and Middle East relations, regional security and education. The group toured the Azerbaijan Diplomatic Academy University and met with the president and vice president of this English-only university that is also totally green and smart, and is a place where students are learning about current international geopolitical challenges and global leadership.

During our stay, we visited numerous mosques, several synagogues, churches and an ancient Atashgah Temple. We attended Jumah prayers, Shabbat services, visited a cemetery where Jewish and Muslim prayers for the deceased were recited, celebrated Purim, and met with imams and rabbis, as well as a myriad of cultural sites.

“Multiculturalism has been characteristic of our people for centuries. For centuries, people of different faiths and ethnicities have lived as a single family in Azerbaijan,” noted Ilham Aliyev, president of the Republic of Azerbaijan, at the Baku International Multicultural Center.

We learned that Azerbaijan belongs to all its citizens, the country engages in a never-ending process of peaceful coexistence; Islam and modernity are not in conflict; and they strive for interreligious solidarity between Islam and other religions. We hope to take these teachings about respect and peace and share the wisdom with others in America: Coexistence among diverse groups is a cherished value that requires cooperation, equality, a discrimination-free society and freedom, and it is thriving in Azerbaijan.

Azerbaijan, a predominantly Muslim country bordering Iran, Russia, Georgia and Armenia, is a demonstration of what peaceful coexistence can look like in a modern world. It is a strategic partner for the United States and Israel, contributes to energy stability and regional security, and upholds its long history of religious pluralism and the absence of anti-Semitism. One of the goals of this bridge-building journey was to broaden understanding of this unique country that regained its independence 25 years ago after decades of Soviet domination, and bring back the peaceful coexistence model which is needed as we continue to deal with the rising anti-Semitism and Islamophobia in America.

Marcia Bronstein is the AJC’s regional director in Philadelphia.