If it weren’t for Rabbi Larry Sernovitz and a gathering on the beach several years ago, Risa Podolnick might still be trying — unsuccessfully — to convince her teenage sons that Judaism is cool.

Podolnick grew up in a Conservative home where ritual was king: “Shomer Shabbas, keeping kosher, Solomon Shecter, the whole works,” she said during a recent visit to the Exponent office with Sernovitz. “I did everything I was supposed to do. Never understood why. I did it because I was told.” 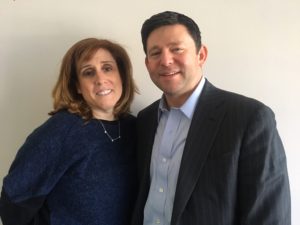 Still, Podolnick said, her upbringing stuck. When she and her husband, David — who also grew up Conservative, though in a less observant home — moved to Cherry Hill, N.J., 20 years ago, they both felt it was important to join a synagogue and have their sons, Noah and Ari, attend Hebrew school. “Still, we felt like we were going through the movements. Nothing grabbed us.”

They tried different congregations, but there was always something missing, Podolnick said. “We weren’t enchanted by it.”

If she and David were disenchanted, the boys were even moreso. Noah tried United Synagogue Youth, but didn’t like it. Ari fought his mother tooth and nail about Hebrew school.

“By the time he was ready for Hebrew high, he was like, ‘I can’t do it.’ I said, ‘Fine. Enough.’ How much can you fight with your child?”

But then, four years ago, 15-year-old Noah went to a North American Federation of Temple Youth (NFTY) event on the beach with a friend, and met Rabbi Larry Sernovitz. He came home aglow, and followed up by attending, of his own volition, events at Temple Emanuel, where Sernovitz had been a rabbi since 2013.

Soon he dragged his parents along too. “We went, met Larry, spoke with him and were like, ‘Wow. We can relate. This is what Judaism should be,’” said Podolnick.

Even the reluctant Ari was persuaded. Now the 16-year-old is a NFTY regular and a Camp Harlam alum. Next summer, he’s traveling to Israel.

“From a kid who wouldn’t touch anything Jewish,” said Podolnick, “it’s unbelievable. They both identify as being Jewish and they both like being Jewish.”

This transformation of Jewish experience for the disaffected is precisely what Podolnick and Sernovitz hope to offer to other area Jews with their new venture, Nafshenu — an egalitarian, progressive community that is modeled on the emergent Jewish community IKAR in Los Angeles.

Set to open in July, Nafshenu is being organized by a group of 15 South Jersey families, most of whom — like 60 percent of South Jersey’s Jewish population — were previously unaffiliated. It is meant to appeal to people who haven’t felt comfortable in the traditional organized Jewish community.

“I always thought ‘nonaffiliated’ meant they really didn’t care about their Judaism, but that’s not the case,” said Podolnick, who serves as Nafshenu’s community coordinator. “They really want something to connect to.”

Some of the Nafshenu families, however, like the Podolnicks, are leaving Temple Emanuel specifically to join the new venture — a fact that rankles Mark Rothstein, executive director of Temple Emanuel, which decided not to renew Rabbi Sernovitz’s contract earlier this year.

“[Sernovitz] had said that his goal was to attract unaffiliated members,” said

Rothstein, “but some [Nafshenu] founding members are Temple Emanuel members who left. They were not unaffiliated. We don’t know moving forward if that same trend will occur—if members of other synagogues will come to him.”

Podolnick, for her part, never planned to leave Temple Emanuel; had Sernovitz stayed on there, her family would have stayed as well. But her family’s bond with Sernovitz was very strong — it brought them to Temple Emanuel to begin with — so when she heard his contract wasn’t being renewed, she started thinking about alternatives. She discussed it with her husband, and they brought the idea of a new community to Sernovitz.

“Risa, David and their vision, their coming to me and saying, ‘Let’s do this’ was really the impetus,” said Sernovitz. In February, the incipient group released a press release about Nafshenu that clearly states, “Nafshenu does not intend to compete with established synagogues and movements across South Jersey but is looking to complement them by providing something new.”

But Rothstein isn’t convinced. What’s more, he feels that by starting work on Nafshenu in February, Sernovitz wasn’t properly honoring his contract, which was due to expire June 30. The two parties have since reached a separation agreement.

“He should have waited till the end of the contract,” said Rothstein, who added that the rest of the synagogue community feels the same way. But, he noted, “I’m not looking to stop anyone from doing what they’re doing.”

Putting aside congregational politics, Podolnick and Sernovitz both feel it makes sense to gear Nafshenu towards people who don’t necessarily cotton to traditional synagogue life.

“Some people the structure works for them, for some people it doesn’t,” said Podolnick.

“In so many places, Judaism has become transactional, it’s become routine,” added Sernovitz. “So as Ron Wolfson and other scholars in the Jewish world have said, we’re not worried about the future of Jewish life — it’s going to continue — [we’re worried about] the future of synagogue life. And if synagogues aren’t able to meet the needs of people who are seeking more than they’re getting, we’re in trouble.”

Both Podolnick and Sernovitz feel they’ll reach people with their nondenominational approach.

“When we put labels on ourselves, we isolate ourselves from the rest of the community,” Sernovitz said. “Scholars are saying we’re moving toward a post-denominational world where Jews are Jews. That gets rid of judgment. We need to begin accepting people for who they are.”

Nafshenu will hold Friday-night Shabbat services twice a month and Saturday-morning services every week. In September, they’ll open a Saturday school for kids in pre-K through 12, with a focus on experiential learning. They’ll study conversational Hebrew rather than academic Hebrew in order to make relevant, contemporary connections during prayer. Prayer services will be music-inflected, casual and open to anyone. The Shabbat-centered community will have a post-worship lunch each Saturday.

In consultation with the Central Conference of American Rabbis, Sernovitz and Nafshenu’s founding members are working on four major components prior to the July 1 opening: spiritual life, education, social justice and organic community. The focus on social justice, Sernovitz said, is simply a matter of Jewish ethics.

“We have a Jewish community that has been very silent on many of the core issues going on in our world right now,” said Sernovitz, who added that talking about right and wrong has nothing to do with politics.

“Judaism would say very clearly that this is a Jewish value issue … I think a lot of people hide behind that [idea that] it’s political because they don’t want to get involved or upset a donor. The bottom line is, let’s go back into the prophetic tradition. Isaiah, Jeremiah and Ezekial weren’t the most popular people, but they spoke what needed to be said to look at the challenges of society.”