It is a story told in frayed telegrams and creased photographs, in faded script on yellowing notebook pages, in postmarked envelopes and stamped passports.

It is the story of the formative years of the late Rabbi Menachem M. Schneerson, the spiritual leader of Chabad-Lubavitch. And it’s a story that, until now, has scarcely been told.

While there’s no shortage of material documenting the Rebbe’s life in the U.S. after he assumed the mantle of Chabad-Lubavitch in 1951, his years in Europe — from his childhood in Russia to his early married life in Germany and France — were less well-known.

Now comes the 543-page book Early Years (1902-1929), a work of prodigious historical investigation by Rabbi Boruch Oberlander and Rabbi Elkanah Shmotkin, which fills in many of the gaps. 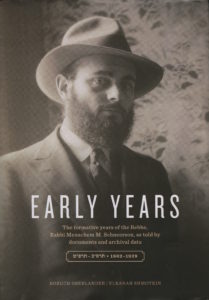 This is not mere biography. The book is replete with thousands of original documents that anchor the volume’s variegated text, which includes snippets from the Rebbe’s writings, letters from family members, biographies of people he knew, in-depth passages explaining the sourcing, and scholarly background primers to further illuminate the content.

Each of the five chapters focuses on a geographic location — Nikolayev, Yekaterinoslav, Leningrad, Riga and Warsaw — and opens with a colorful annotated map.

The book — produced by Chabad’s Jewish Educational Media (JEM) and published by Kehot Publication Society, Chabad’s publishing arm — also has extensive notes, a glossary, a family tree and a transcription of the passports belonging to the Rebbe and Rebbetzin.

The genesis for the project started in two places at the same time, more than 20 years ago.

Rabbi Baruch Oberlander, Chabad’s emissary in Budapest, began compiling dates and documents pertaining to the Rebbe’s early years in the late ’90s, even before he had a computer.

“Since the Rebbe didn’t speak much about himself, there were like five dates that we knew for sure: when he had his bar mitzvah, when he left Russia, when he got married and when he arrived in the United States,” said Oberlander, a professor of Jewish law and head of Budapest’s Orthodox Rabbinate.

Oberlander wanted more, so he began to compose a timeline.

“What a person does when he grows up and what he learns and who teaches him, this makes the person,” he said of his interest in the early years, “especially such a special person.”

One written page grew to three, then five. When he switched over to computer, it became easier to annotate the dates. Within a few years, he had a 250-page Hebrew-language behemoth.

At the same time, the archivists at JEM were gathering information for the “My Encounter with the Rebbe” oral history project and for the series of films called “The Early Years.”

“We wanted to interview people who were oldest and had the most unique interaction going all the way back to Europe — Russia, Poland, France, Germany, this period when so much less was known,” said Oberlander’s co-author, JEM Director Elkanah Shmotkin. “In order to do that, we were contextualizing the interviews for the sake of the film. So we gathered a bunch of documents—when did the Rebbe and Rebbetzin live in Berlin? When did they live in Paris? How did it all come together?”

When JEM learned of Oberlander’s project, it made sense to combine efforts and turn it into a book. That’s when an army of researchers across the world — scholars in Russia, Belarus, Ukraine, Poland, France, Germany, Portugal, Spain, Austria and Latvia — were deployed for an intense communal undertaking.

“It’s very time-consuming work,” said Shmotkin, who noted that each new data point from an era or event would necessarily send them back to the archives for further clarification.

“You say, ‘Hmm, I have a clue here … How does that gel with some other location or address that we know?’” said Shmotkin. “You continue to iterate and to learn new things and make a new discoveries, and that sends you back to the information you already have. It’s not until you think you’re ready to publish that the final questions or inconsistencies or whatever hit you over the head — and then you have to go back around again.”

Sometimes there was a revelation at the end of the road; other times, the team had to resolve themselves to their unfinished business. “Each piece of information is a whole world,” said Shmotkin.

One of the major revelations that came from the sleuthing was the name of one of the Rebbe’s childhood cheder teachers, who the Rebbe had referred to in anecdotes but had never been identified.

“About a year ago or so we got this lead that there was this family in Israel saying that their grandfather taught the Rebbe,” said Shmotkin. “OK, ho-hum, you know, another lead, another person saying they have some connection. Part of our job is to be skeptical, which you have to do when you work on a project like this.”

But this time the lead delivered. As soon as Shmotkin heard what the Israeli grandfather had said about the Rebbe’s younger brother, he said, “Bingo, this is the guy. Because how many people, when they’re making up a bubbemeise, would know enough that the Rebbe had an extremely sharp younger brother?”

Armed now with a name, they turned to the Rebbe’s archives looking for proof. And there it is, on page 139 of The Early Years: the beginning of a typewritten letter written to the Rebbe by “the son of your teacher,” which verifies the teacher’s identity.

In that case, a ho-hum lead turned into “a really exciting find,” Shmotkin said.

Other times, the team was less fortunate, like when they sought to find a Russian-language tract by the Rebbe about the Star of David that the Rebbe’s mother once mentioned in a letter.

Because the Rebbe was writing the document for a Russian professor later killed by the KGB, they decided to check the professor’s files in the KGB archives, hoping the manuscript would be there. They were told the archives would only release the file to next of kin, so Shmotkin’s team located a grandson in Moscow who signed the necessary paperwork.

But when they finally got a look at the professor’s file, it consisted only of 10 pieces of paper. The Rebbe’s manuscript was not among them.

“That was an interesting hunt we were on that didn’t yet pan out,” Shmotkin said.

That “yet” is important, as the project is far from over. Two more volumes are planned to cover the Rebbe’s life in Berlin and Paris until 1941.

“I really hope it’s not going to become four volumes!” Oberlander joked, adding that he’s looking forward to revising the first volume. “I’m sure that people are going to come up with corrections. New documents are going to come to light, and I’m happy about that.”

Shmotkin is also anticipating the next stages: “Any project related to the Rebbe seems to be so much bigger than you think it’s going to be when you start,” he said. “You’re just peeling back layers, and there’s so much fascinating material there.”