Whether it’s a convention where super fans don puffy shirts and eat Junior Mints or the unveiling, this week, of a 100-piece miniature Seinfeld set that can be purchased for one’s coffee table, the interest in the show has hardly diminished.

College students celebrate Festivus on campus; smartphone users download Seinfeld emojis for their texts. People still say “yadda yadda” and “not that there’s anything wrong with that” as though the phrases were minted yesterday.

The tenacity and longevity of Seinfeld’s appeal is one of the things that surprised author Jennifer Keishin Armstrong when she began work on her book, Seinfeldia: How a Show About Nothing Changed Everything, which she’ll speak about at 7 p.m. on Feb. 22 at the National Museum of American Jewish History.

“I knew people still loved Seinfeld,” said Armstrong, a pop culture writer who previously authored a history of The Mary Tyler Moore Show. “But I don’t think I appreciated the depth to which people have it in their everyday lives. The show is really unique in that way …  people are still demonstrating fandom in really intense and fascinating ways.”

To describe the way in which Seinfeld’s fictional universe collided, almost from its inception, with real life, Armstrong coined the term “Seinfeldia.”

“It is a place that the show’s creators, Larry David and Jerry Seinfeld, constructed themselves,” Armstrong writes in her book’s introduction, “even if they didn’t realize it at the time, when they blurred the boundaries between their fictions and reality like no show before Seinfeld did. …

“Seinfeldia is a place that now carries on, as vital as ever, without its original architects, thanks to incessant syndicated reruns that continue to gain new generations of fans and a religious fan base bent on ritually resurrecting the show’s touchstone moments via cocktail-party quote recitations.”

Armstrong’s book is, as The New York Times asserted in a glowing review, “a deep dive,” investigating the roots of each one of those touchstone moments and the way they have pervaded the vernacular imagination. 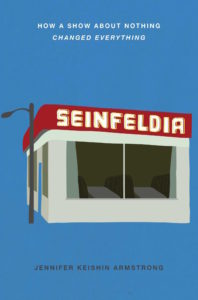 But Seinfeldia is also a thorough history of the show’s evolution — from an unconventional concept David and Seinfeld could barely sell to the No. 1 hit TV show in America.

To get all the details — from casting conflicts to the discovery of the theme song’s slap bass — Armstrong spoke to an army of the show’s staffers, many of whom were Jewish. Many of the show’s writers shared the personal stories behind the best-loved and most popular episodes, as well as the ways they found to navigate David’s neuroses and Seinfeld’s distractibility.

Armstrong also learned a lot about the show’s ongoing battle to counter network perceptions that it was too Jewish, too New York — a battle that was mostly internal as the majority of American viewers didn’t seem to care one way or another.

“The show has a really confusing relationship with Jewishness,” she said. “I don’t think most people thought about it that much.”

The network concerns, however, may have kept the show from being too obviously Jewish.

“George Costanza is named ‘Costanza,’ but to me is fairly clearly culturally Jewish,” said Armstrong, a self-described shikse from the Midwest. “[Cast member] Jason Alexander, who is Jewish, said he knew George was Jewish when he met his onscreen mother.”

Armstrong points to plenty of “culturally vague Jewish stuff, like babkas,” as well as a couple episodes that tackled Jewish content directly — one with a bris, the other with a Bar Mitzvah.

Despite these moments, Armstrong said, “it’s not as if they were putting on their yarmulkes and going to services.”

Even so, Armstrong said, “I learned about Jewish culture to some extent from Seinfeld — it was my first introduction to some of those concepts.”

Now those concepts are well within her wheelhouse as she travels to Jewish venues across the country to talk about her book, which was featured by the Jewish Book Council this year. But even at those venues, the subject of Jewishness doesn’t come up too much. She has offered to gear her presentation toward Jewish content, but most places, including NMAJH, have told her not to worry about it. They just want to have fun and talk about the show.

And if her book is any indication, Armstrong has plenty of fun, quirky details to share with an audience, including the peculiarities of cast members and creators. Some of it may seem like TMI for fans, but even after spending the last couple years firmly ensconced in Seinfeldia, Armstrong’s appreciation of the show hasn’t dimmed.

“I’m constantly telling people, ‘Don’t write about something you’re not really into.’ I would never have written this book if I wasn’t into the subject matter,” she said. But, she adds, “there’s something weird about [Seinfeld]: You can watch it over and over and over again and never really get tired of it.”