At his inauguration in October, the new president of the University of the Arts, David Yager, spoke about the school’s future. He described the students as “fearless and forward thinking,” and the university as “distinctive and bold.”

In the years to come, he said, the university “will be like something we have never seen before.”

That’s precisely what some people are worried about.

The university owns 401-11 S. Broad St., which was built in 1924 as the Young Men’s & Young Women’s Hebrew Association, and is now better known as the home of the Gershman Y. The Preservation Alliance of Greater Philadelphia recently nominated the building for historic designation after becoming concerned that the university was planning to significantly alter or even demolish the building.

“We heard a rumor that we judged credible that the owner of the building was considering major changes to it in connection with their own campus planning needs,” Alliance Executive Director Paul Steinke said, “and thought that the building warranted designation. We were kind of surprised that it wasn’t already designated, and that’s what prompted us to take this action.”

Steinke said one of those credible rumors included the possibility that the building would be demolished — a rumor that the Exponent also heard through credible sources.

But UArts spokesman Paul Healy said the university has no particular agenda related to 401 S. Broad.

“At the moment, we don’t actually have any plans for the building,” Healy said. Regarding demolition, he said, “It would be impossible to not be doing something you don’t have a plan for, in essence.”

The university does, however, oppose the building’s historic designation.

“We just don’t agree with the Preservation Alliance’s assessment of the historical status of the building itself,” said Healy. “It’s as simple as that. … We don’t agree that the building merits that designation.”

The civic body that decides designation is the Philadelphia Historical Commission, whose architectural committee met last week to consider the building’s nomination. 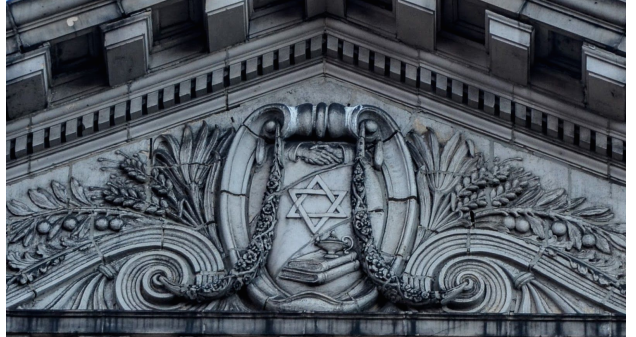 The Preservation Alliance’s 30-page nomination was praised by the committee for being both deeply researched and concise, and for shedding light on the Y’s impact on the arts.

“I had no idea of the role the Y played in fostering a taste for modern art in the 1960s, or the people involved, which is quite a who’s who,” committee member Jeffrey Cohen said.

“I also thought the question of modern art was wonderful,” committee chair Emily Cooperman said, “particularly given the parallel to what is going on in synagogue design in the same period in terms of the patronage of modern artists in the installation of not just decorative but liturgical objects in synagogues.”

The members of the Preservation Alliance confessed they were also surprised by what they learned about the building, which was designed by architects Frank E. Hahn and S. Brian Baylinson in the Georgian Revival style and was celebrated in the year it was built, 1924, “as the largest Jewish institutional building of its kind in the United States,” according to the nomination.

It was also the first time that a YMHA partnered with a YWHA to create a building for joint purposes.

“We were struck by the facts that went into why this building is historically quite important,” said Steinke, “especially to Philadelphia’s Jewish community and the history of Philadelphia’s Jewish community, which experienced rapid population growth in the decades after 1870, leading to a population in 1920 of a quarter million, almost, whereas 50 years before it was less than 20,000.”

He also pointed to the cast of characters involved: Along with civic leader Albert M. Greenfield, who shepherded the project from conception to completion, others involved in making the building a reality included Charles and Ellis Gimbel, Samuel and Jacob Lit, Joseph Snellenburg, Samuel Fels, Jules E. Mastbaum, Samuel S. Fleisher and family, and more.

“These were not just prominent names in the Jewish community in Philadelphia but they were prominent names in the city of Philadelphia, period, and they banded together and raised the money to build this thing in record time,” Steinke said. “And then they picked a prominent downtown corner as an assertion of the community’s expanded importance in the city … So it was an enormously important statement by one of Philadelphia’s most important communities — that being the Jewish community — at a time when their numbers and importance in the city had exponentially increased.”

The committee unanimously agreed that the building satisfies several criteria for historic designation, and voted to recommend its approval to the commission at large.

Though a final vote on the designation was originally scheduled for the next meeting of the Historical Commission in January, the University of the Arts requested and was granted a continuance, so the commission will now consider the designation at its April meeting.

Between now and then, said the University of the Arts’ lawyer Michael Sklaroff, of Ballard Spahr, the university hoped to meet with the Alliance to try to hash out their differences.

“There are structural and other physical challenges to the building — some are obvious from the outside, some are not so obvious — there are interior issues,” Sklaroff told the architectural committee. “We’ve used the opportunity since the nomination to have some serious analysis and a structural engineer assess the building.

“So we hope that by the April meeting, [the Alliance and UArts] can find common ground on what elements of the building are character-defining and not only are worthy but are capable of preservation, and also to find a respectful way to kind of memorialize the history that is not entirely contained in the physical expression.

“So it’s going to be a challenge, but we hope to find common ground, and in the April meeting come up with some sort of proposal for the future of the building.”

But if the university continues to oppose the Y’s historic designation, it may make the search for common ground rather tough.

“Any assertion that [the building] doesn’t warrant historic recognition is just off-base,” Steinke said. As for Sklaroff’s references to structural problems, Steinke notes that the designation only pertains to the building’s exterior, so “they would have complete flexibility in reconfiguring the interior layout and finishes in the building.

“Any change to the building once designated would simply need to go before the Historical Commission for their review and possible approval. …. It doesn’t freeze the building in time. It just inserts a layer of review to ensure that its most important features are respected and protected in any renovation or alteration.”

Steinke said the Alliance is open to working with the university to help address the structural issues.

“We have offered the involvement and expertise of the Preservation Alliance and of people who are on our board or active with the organization to help them evaluate this building and enable them to adapt it to their contemporary needs,” Steinke said. “We have renowned preservation architects, conservators, construction company owners, engineers, who would be happy to sit down with them and help them …. And [UArts] have indicated a willingness to do that, so we’re on the right track as far as that’s concerned.”

“Whatever the outcome, the university has always tried hard to be good citizens and good neighbors,” said Paul Healy, “and we are very intent on working with our neighbors in the community at large, no matter what the result of the hearings are.”

The current tenant of the building, the Gershman Y, has a lease from the University of the Arts to rent the space through the end of 2017. The Gershman Y declined to comment for this article when asked about the building’s potential for designation or demolition, but the nonprofit is reportedly considering other locations in Center City in case it has to move.