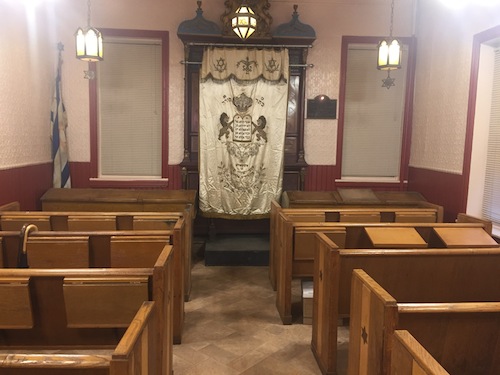 He held out the bimah’s weathered American flag with its 48 stars. “It predates 1959.”

Most of what you find around the synagogue, occupying a three-story storefront at 2015 S. Fourth St., definitely shows its age.

The shul moved there in 1909, though the building itself was constructed in 1896.

The synagogue’s history is evident everywhere you look: The ark and bimah are the original wood; the walls and ceiling are made of tin; the ner tamid is the original fixture. Deeper secrets of the synagogue’s past are hiding in plain sight.

For instance, the wood forming the bimah and the marble pillars filling it in have a common stain finish, but Sisman pointed out that if you look closely, you can tell that people actually just dragged their fingertips in an upward motion to get the marbling effect.

Adorning the walls are certificates and photographs of past members,  one from 1932 with a pre-state Israeli flag. Though the flag is tilted, the Star of David is straight up.

“Before ’48, there was no star on the Israeli flag — it was just two blue stripes. So somewhere after ’48, they penciled in this Jewish star,” Sisman chuckled. “There’s a lot of little things like that.

“My ideal is to preserve and restore. I don’t want to modernize anything. I want it to be the same that it was and keep it going.”

Not much has changed since they moved here in 1909 — and that’s intentional.

And most of that can be credited to Sisman, who refers to himself as the “chief cook and bottle washer.”

Sisman grew up half a block from the shul. His family usually went there even though they were not Orthodox.

“I moved away in the ’70s when the neighborhood started changing. About 20 years ago, I was driving by on a Shabbos Saturday morning, and I saw the door open. I thought, ‘That can’t possibly be.’ So I pulled over and came in.”

After that, he started going back occasionally “because it felt like home.”

About 10 years ago, Al Heller, the man who ran the shul, passed away, so his brother took over. But according to Sisman, he stopped paying the bills and wanted the synagogue to close.

“It’s like the last of its kind, so I said, ‘Give me six months.’ Well, that was eight years ago, and I’ve been the president since then,” Sisman said.

Sisman had to fix water damage, deal with radiator explosions and contend with other issues, paying for repairs mostly out of his own pocket.

The city later condemned the building because a wall in the back was falling down and neighbors complained.

But a major asset in getting the shul up and running again was Mayor Jim Kenney, who was a councilman at the time.

“I got a phone call that said, ‘You don’t know me, but this is Councilman Kenney. Twenty years ago, I offered to help out Heller, and he told me no thanks.’ I said, ‘Before you finish the sentence, whatever you’re offering the answer is, yes, thank you’,” Sisman recalled. “Whatever I needed, I called his office and they helped me out.”

The shul hosts services the first Shabbat of the month as well as the High Holidays, averaging about 30 people. The clergy is still all volunteer-based; no one is paid.

“The closest thing to full-time is me,” Sisman said.

Someone made a donation to have the wainscoting below the tin walls painted a lively red before the High Holidays — it’s one of the few visibly new aspects of the shul.

Another new feature is the lighting. Sisman remembered the bright fluorescents that hung in the synagogue when he was a kid. Joel Spivak, a member of the board of directors, told him, “‘I feel like I’m praying in Kmart,’” Sisman laughed.

They updated the light fixtures with ones that “look old,” but are really from Home Depot.

Since the building is already paid off, that keeps the everyday expenses — electricity, gas, oil — pretty low, too.

“Our membership dues are very expensive. We charge $36 a year, $72 for a family, $180 for a lifetime membership and $360 for a family lifetime,” Sisman joked. “The idea is we just want people to feel a part of the shul. We turn no one away. You want to be a member but can’t afford the $36, send what you can; if you can’t afford anything, we’ll make you a member anyhow. We need money, obviously — [but] I’m more concerned with people.”

Sisman also maintains a full-time job as a technical consultant.

“Everybody who comes falls in love with the place. A lot of people who were kids in the neighborhood, they’ll come in and look at the memorial board and say, ‘Oh my God, that’s my grandfather’s plaque,’ and they didn’t even know [it was here].

“Because we’ve been here so long, a lot of people have connections.”

Sisman added that the homey feeling differs from other big synagogues like those in the Northeast, where you “feel like you’re just part of the masses.”

“Since it’s a small little shul, we can include just about everybody who’s here for every service,” he explained. “A big synagogue, if you’re there or not it doesn’t make a difference. Whereas here, not showing up, we may not have a minyan.”

The second floor, which Sisman hopes will be a large all-purpose space, is still being renovated. A drop ceiling was installed and new floors will be added soon.

The third floor has been relatively untouched for decades. The wallpaper has peeled, revealing old bricks. The fluorescent lights from Sisman’s childhood are still up.

Sisman wants to take advantage of this space as well, though it’s not as high a priority at the moment.

He added that much of the building was built by Polish, Russian and Lithuanian Jewish immigrants who created the synagogue, or a craftsman shul.

“A lot of the things were built by the members themselves. If you look close, you can see a lot of it is not perfect or professionally done” — like the pillars on the bimah.

Only one wood pillar of the entire perimeter of the bimah differs from the rest. They’re identically oblong except for one, which is blockier and square.

“Someone told me — I don’t know if it’s true or not — that it was intentional. Men couldn’t do things perfectly, only God can,” Sisman said. “Somebody [else] said, ‘Nah, they probably broke one and tried to make it as close as they could.’”

But one of Sisman’s favorite artifacts is a silver tablet imprinted with a dedication to Mrs. Dora Wilsker for a $1,000 donation to pay off the mortgage. It has no date, but the congregation acknowledged her as the “synagogue mother” from then on.

“So when people say, ‘How did this shul survive when all the others didn’t?’ I say, ‘We have a Jewish mother looking out for us.’”