A few people may know Kal Rudman from his days at Central High School (188th class) or his early post-University of Pennsylvania stint as a special education teacher.

Others may remember him as a DJ with the moniker of Kal “Big Beat” Rudman.

Then there are those in the music industry who know him for the Friday Morning Quarterback, the influential trade publication he founded in 1968 — and where he still serves as publisher.

That led to more than 30 appearances on The Merv Griffin Show, as well as Today, where he was a regular guest. It also resulted in a Forbes 1972 Person of the Year, Entertainment Industry award and a plaque along Broad Street as part of the Philadelphia Music Alliance’s Walk of Fame.

And old-school pro rasslin’ fans may recall a guy named “Killer Kal,” who did play-by-play and interviews for what was then the World Wrestling Federation. A YouTube search for “Killer Kal” turns up an interview he conducted with a pre-fame grappler billed as the “Incredible Hulk Hogan.”

Today, though, Solomon “Kal” Rudman wants to be known as a philanthropist.

At 86, he spends much of his time with the Kal and Lucille Rudman Foundation.

When asked about the origins of his philanthropy, Rudman answers in a deep voice that pronounces every syllable — reminding you of why he succeeded as a DJ and as an on-air personality.

“When I got money,” he said, sipping a Diet Coke on the screened-in porch of his contemporary home in Cherry Hill he shares with Lucille, who helps flesh out the details.

When pressed further about why he’s giving away his life’s proceeds?

Rudman’s local contributions are impossible to list in one place, but he tends to focus on the categories of education and public service.

One program that he dubs a “mini med school” is underway for the first time at Einstein Medical Center, having succeeded at other hospitals. The program came about because of a $25,000 foundation donation.

“I believe in raising people up beyond their current situation by breaking down social and cultural barriers,” he told Einstein.

Known as the Medical Career Preparation Program, the three-week program is designed to educate the next generation of medical professionals from Central and Girls high schools, said Laura Romano, Einstein’s director of volunteers, chaplaincy and language services.

Over the course of several hours, the students complete several “rotations,” such as observing the emergency room, the Neonatal Intensive Care Unit (NICU), the pharmacy and the labor and delivery suites. There, they shadow and learn from Einstein staffers and even get some hands-on experience.

There also is time set aside for journaling their experiences, while the afternoon features speakers, such as trauma surgeons, representatives from the Gift of Life organ donation program and a chaplain, who explained how faith might impact a treatment plan.

“Here you have terrific kids … using their summer time to not just hang around,” Romano said.

Students said they were enjoying the program.

“This week at Einstein I shadowed doctors and laboratory technicians in pathology. It was really interesting because pathology is one of the areas of medicine that you don’t really hear or see much of, but is nonetheless vital,” Central High student Miriam Solowey said. “I got to visit the microbiology lab, the hematology lab, the chemistry lab and the blood bank. I also got to look at various tissue samples under a microscope with a pathologist. I was amazed by how much the pathologist was able to determine from such a small sample of tissue.”

“Before this program I knew two things. I wanted to be a doctor, and I wanted to work in the ER,” Central High student Ralonda Butler said. “This program has really broadened my view and perspective of the medical field. I never knew how big it was.”

And while Rudman is Jewish, his philanthropy extends beyond Judaism.

For example, Rudman recently sent Berks Catholic High School in Reading $5,000 to repair vandalism damage to exterior walls and religious symbols (including a statute of Mary) that were spray painted.

“This monetary donation really helps us work our way toward becoming whole in terms of all the cleanup that had to be done,” Principal Tony Balistrere said in a release.

Earlier this year, Rudman assisted the Saint Lawrence Church at Our Lady of Guadalupe Parish in Lindenwold, N.J. when it also was vandalized.

Although he’s worked in professions that call for much hyperbole, Rudman’s modest about his philanthropic efforts, which date to the 1990s.

“Be double humble, triple sincere and totally transparent,” he said.

That’s easy to say, but difficult to abide by, considering that the Rudman name can be found throughout town.

That’s due to contributions that help fund Temple University Television, the Kal and Lucille Rudman Institute for Entertainment Industry Studies at Drexel University, a firefighter scholarship program at Holy Family University, a health tech program at St. Christopher’s Hospital for Children and even the atrium at the Jewish Community Services Building.

Rudman said philanthropy is easier than other endeavors.

“I don’t want to write a book,” he joked. “Too many people would have to leave the country.” 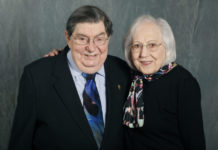 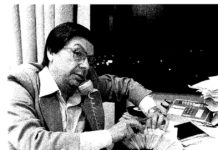