A J Street event at the NMAJH drew plenty of supporters, but one the night before drew protesters.

It was a star-studded evening at the National Museum of American Jewish History July 27, at least in terms of Democratic National Convention star-power.

The event, said Jessica Rosenblum, J Street’s vice president of communications, was about “breaking out of the box”— a strategy made literal in the organization’s new logo, a letter J in a square with an arrow breaking through one of the box’s sides. The new logo could be seen on buttons, pens and brochures that were layered on top of the numerous white-clothed tabletops in the 3rd-floor event space at the museum.

“It’s a celebration of the work we’ve done and the work we still have yet to do,” Rosenblum continued, pointing to J Street’s endorsements of candidates for the House and Senate. (They do not endorse for federal offices.)

Rosenblum stood with Dan Siegel, deputy regional director of J Street in Pennsylvania and New Jersey. A native Philadelphian, Siegel started working for J Street in 2015; the organization was founded eight years ago, and now has seven regional offices and 65 staff members. It also has increasing influence politically, which is deliberate.

“We exist to create political power around the American involvement in moving toward a peaceful solution to the Israeli-Palestinian conflict,” Siegel said. “For a long time, there’s been a single narrative on how to address the ongoing conflict between Israel and the Palestinians, and for a long time in the Jewish community we couldn’t have a robust conversation about it. … It’s great that the Jewish community is starting to talk about it, but it’s even better that we’re starting to mobilize power in Congress to actually move towards the political will for the parameters for a two-state solution so we can get to a place where Israel exists in perpetuity as a peaceful, Jewish Democratic state.”

“Politically, we started a PAC in 2008 and endorsed 29 winning members of Congress,” he said. “Steve Cohen, the congressman from Tennessee, was the first person who accepted our endorsement, and he did a video for us. We were so happy that a member of Congress would accept our endorsement and agree to appear publicly on our website. Today, eight years later, we have now endorsed over half of the Democratic caucus in the U.S. House, and when we are done, we will have endorsed 20 sitting U.S. senators who take their seats in January 2017.”

Ben-Ami had high praise for legislators who made the Iran deal — which he characterized as “the most significant nuclear nonproliferation agreement that has ever been entered into” — a reality.

“Many members of the U.S. House and of the Senate took what they consider and what we consider to be a politically bold and courageous step in stepping forward and doing the right thing,” he said, “in saying they support the Iran deal because it is in the best interests of the United States, the best interests of the state of Israel and of the other allies in the region.”

Ben-Ami predicted that those who voted for the Iran deal would win reelection, while those who fought against it would fail.

“Standing for diplomacy, standing for engagement on an issue as important as nuclear weapons in Iran, is, in the end of the day, a political plus, not a liability, and we will prove that in November.”

One of those who fought for the Iran deal was former Ohio Gov. Ted Strickland.

“I believe deeply and strongly in the special relationship that our country has with the state of Israel,” he said. “I believe that we should work to preserve and strengthen that relationship. But I can tell you that when the Iranian agreement was reached, I had people tell me that I did not need to take a position—that the political wise decision would be for me to stay silent. But I deeply believe that it was the right decision for our country and the right decision for Israel, and I also believe that diplomacy is better than war and conflict, and so I have taken that position. I have paid some political price for that, but I do not regret that decision whatsoever.”

The next speaker, Illinois Rep. Tammy Duckworth, also alluded to the way the Iran deal might challenge her chances in November.

Discussion of the Iran deal wasn’t surprising, given that it will be a critical issue in both Strickland’s and Duckworth’s upcoming election battles, and is probably the most controversial position J Street has ever taken.

In fact, it was the Iran deal that seemed to galvanize the protesters who stood outside J Street’s “Evolving Politics of the Jewish Community: Giving a Voice to Pro-Israel, Pro-Peace Jews” event that took place the day before.

The narrow sidewalk outside of Davio’s Northern Italian Steakhouse, on 18th between Chestnut and Sansom streets, was almost too crowded to walk on. Standing in front of the restaurant, there was a bouncer and two J Street representatives, who were ushering attendees inside.

Across from the entrance, there was a crowd of about 15 protesters, holding signs, and chanting, “J Street is not pro-Israel,” “J Street supports Iran” and “J Street does not speak for Jews.”

The grassroots gathering, comprised in part of members of the Zionist Organization of American (ZOA) and the Republican Jewish Coalition (RJC), had a very specific purpose, according to one of the organizers, Lynne Lechter.

“It’s to get the message across that J Street does not speak for most Jewish people, that most Jewish people see it as just another group supporting Hamas, terrorism, the West Bank,” she said. “Under Clinton, Obama, Kerry, the rise of anti-Semitism, the proliferation of BDS, backed by J Street, is hurting our people, it’s hurting the people in Israel. And we are very proud, strong Jews and we want the world to know that this horrible group, which is really a lie, which is not a Jewish group — they’re a pro-Palestinian, pro-terrorist group.” The protest was not organized by the ZOA.

“I loathe and despise J Street,” he said. “I think they’re anti-Israeli, which makes them anti-Semitic, and anybody who doesn’t understand that is delusional or is anti-Semitic.”

“Any Jew that supports the Iran deal is not speaking for Jews or Israel, so we want to get the message out about the Clinton, Kerry, Obama regime that has destroyed the Middle East,” said Lechter, a member of the Israel advocacy group of her synagogue, Temple Beth Hillel-Beth El in Wynnewood, and a self-described supporter of ZOA and RJC. “[J Street] is an oxymoron. They purport to say they’re for Israel when they really aren’t. They’re backed by Soros who is notoriously anti-Israel, who tried to take Bibi down. This is not a pro-peace group because their policy will not help Israel achieve peace.”

Tems, the son of Holocaust survivors, went even further.

He described going to a Christians United for Israel event at a megachurch where people were waving the Israeli flag and singing Hatikvah. “So I know who our friends are and I know who our enemies are.”

Regarding Lechter’s assertion that J Street does not speak for most Jews, Siegel said: “We believe that the only way to maintain a peaceful Jewish Democratic state is to create two states for two peoples, which is a long held belief not just of the Democratic Party but of the American Congress as a whole and the overwhelming majority of the American Jewish community. We represent a voice in the Jewish community that has always existed but has never had a place to call home.” 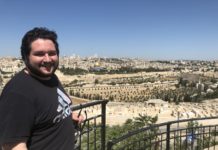 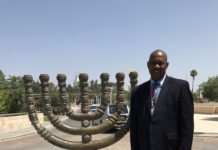 Rep. Evans’ Visit to Israel: Middle East Peace Starts from the Ground Up