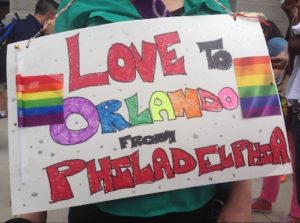 Steven Share woke up June 12 to a flurry of notifications.

“My first thought was, ‘Who do I know in Orlando right now, either who lives there or is there for vacation or Pride festivities?’” he said.

“My partner and I were getting text messages all day: ‘I know someone who knows someone who was killed Saturday night.’”

Share, project manager of Spectrum Philly, a Jewish LGBTQ organization, was not the only one who felt the ripple effects of the mass shootings in Orlando.

What happened in Orlando is not an isolated event — it affects the entire nation.

In the early morning hours of June 12, gunman Omar Mateen killed 49 people and injured more than 50 others in the popular gay nightclub Pulse during Latin night.

He had previously expressed homophobic sentiments and allegedly called 911 and pledged his loyalty to the Islamic State.

“Fifty people are out at a nightclub Saturday night and lost their lives just for being out and dancing and celebrating who they are and our community,” Share said.

At the Philly Pride Parade that same day, which he was unable to attend because he had been sick all week, many of his friends told him that the tragedy actually brought the community together.

“Even though it’s down there in Orlando, it’s our soil and our community. And when you’re already a smaller demographic, it gets closer and closer,” he said. “It could have been any of us. It could have been, God forbid, a gunman at Woody’s or ICandy or any of the bars here in the Gayborhood.”

Spectrum Philly considered hosting its own Jewish community vigil but decided instead to join the June 13 gathering at City Hall.

“There’s something really special about our Jewish community, especially here in Philadelphia. Everyone’s so close and loving, and I feel like so many people here have a sense of tikkun olam and repairing the world that our Jewish LGBT community, I think, is really coming together and supporting each other. Fifty people lost their lives and another 50-something are injured. That touches everyone.”

Mark Segal, founder and publisher of Philadelphia Gay News, said he had mixed emotions about the atrocities at first.

In the early morning, when he left for the parade, he didn’t quite know all the details yet.

“As we began to march, slowly but surely people came up to me and said, ‘Are you aware what happened in Orlando?’ I think before the march I assumed, ‘Oh, just another act of violence against our community,’ not realizing the severity of it,” he explained.

Halfway through the march, it dawned on him how big this was.

“It started giving me flashbacks to the Stonewall and that first gay pride we had in June of 1970,” Segal said. “We were marching then in defiance of society. It was a march — it wasn’t a parade as [Sunday’s] was and most of them were across the country.”

But the murders hundreds of miles away will cause a great impact on communities here in Philadelphia and across the nation.

“I also think it’s affected the Muslim community,” he added. “I think what we’ve discovered is that all three of those communities” — Muslim, LGBTQ and Jewish — “understand what discrimination is. We realized that we have to raise our arms together and hold each other’s spirits high in order to fight discrimination and hatred.”

Jewish institutions in Orlando voiced their sympathy over social media, conjuring feelings similar to the terror attack in Tel Aviv on June 8.

The University of Central Florida Hillel, for instance, posted to its Facebook page June 12, “As a community, we are still reeling from the brutal mass murder of Israelis at Sarona in Tel Aviv earlier this week by Palestinian terrorists. Terrorism, whether foreign or domestic, is still terrorism and we must stand steadfast, shoulder to shoulder with its victims just as we stand resolutely against its perpetrators.

“In this case, as with the case in the Dolphinarium nightclub in Tel Aviv when Palestinian terrorists brutally murdered nearly two dozen youth in a nightclub, the mantra came out (and quickly became a hit song) ‘don’t stop dancing!’ The answer to this sickening terrorist attack at Pulse is thus to quickly clean up the place and hold an even bigger dance party where the whole community (gay, allies or otherwise) comes together to say to the haters ‘we won’t stop dancing.’”

And now 15 years since that Tel Aviv nightclub bombing, that city’s Jewish community reacted by showing signs of solidarity. Tel Aviv’s City Hall, which has programmed lights on the building, displayed a rainbow flag, Israeli flag and American flag.

The Philly Pride Parade continued that afternoon as did many other pride parades across the country, though there was a tinge of fear. In Los Angeles, police arrested a man who intended to go to the parade armed with guns and explosives.

Phoenix Schneider marched with J.Proud Consortium, the LGBTQ initiative of Jewish Family and Children’s Service. This year, there was an added weight of importance and solidarity.

“I woke up to the tragic news, and then an hour later had to be at Philly Pride and lead the J.Proud consortium in the Pride Parade followed by the festival, so for me — it’s even hard to articulate,” said Schneider, director of J.Proud. “I just felt like, it’s a day where we’re supposed to be celebrating and to hear this on any day, let alone on Pride, was just heartbreaking.”

Being at the parade and continuing to march was a way to stand united in the face of those atrocities the night before.

“Walking with my friends and colleagues, it felt almost extra important to be there — to be visible and to take a stand together, unite as one and almost to say, ‘We’re here, and we’re always going to be, we’re going to continue to be who we are in the face of this tragedy.’”

While he is still processing what happened, it highlights the importance of education and advocacy, two tasks J.Proud continues to do.

It also illuminates the struggles many in the LGBTQ community continue to face every day, he added.

“This is at the extreme end of every day,” he said. “People who are LGBTQ experience violence, experience discrimination and even with everything happening with the bathroom laws — all these things take its toll on us as individuals and as a community. … I know a lot of people besides myself would love to just be ourselves and not feel like we have to be on edge or live in fear, and I think that speaks to the importance of being at Pride. There was some fear, but at the same time I won’t let that take away from my pride and my desire to be there for my community and to be myself.

“My heart feels heavy,” he said, “and I just would like to send a virtual hug to every LGBTQ person and ally and every person who’s been affected by not only this tragedy but any act of violence and discrimination for being who they are.”