Education was the theme at the National Museum of American Jewish History’s gala June 1 at Gotham Hall, which made it the perfect backdrop to induct Julius Rosenwald into the museum’s Only in America Gallery/Hall of Fame.

NEW YORK — Education was the theme at the National Museum of American Jewish History’s gala June 1 at Gotham Hall, which made it the perfect backdrop to induct Julius Rosenwald into the museum’s Only in America Gallery/Hall of Fame.

Not only did Rosenwald make it possible through his philanthropy for thousands of African-American students in the Deep South to learn, he taught others how important it was for Jewish Americans to pass on his basic ideals of caring and tikkun olam.

But not many know his story, which is why the museum decided it’s time to tell it and honor him 84 years after his death.

“There are many things he did in philanthropic ways to lift the Jewish community,” said Phil Daviroff, co-chair of the museum’s Board of Trustees, of the man who grew up across the street from Abraham Lincoln in Springfield, Ill., then made his fortune as president and chairman of Sears & Roebuck. “But his extraordinary philanthropy in the African-American community stands out.

“He worked with Booker T. Washington at Tuskegee Institute to help build schools throughout the South for African-American students. He built three schools in Alabama in 1914, but by the end of his efforts, he’d built 5,300 schools. It’s a remarkable achievement not well known.”

Rosenwald, who set up his foundation to stop dispensing funds and disband 15 years after his death, becomes the 19th inductee into the Only in America Gallery, which honors such American Jews as Dr. Jonas Salk, Louis Brandeis, Irving Berlin, Leonard Bernstein, Barbra Streisand, Steven Spielberg and Sandy Koufax.

“We realized how few people know Julius Rosenwald’s incredible story and felt it was incumbent on the museum to make sure this inspiring story was more well known,” said NMAJH CEO and Gwen Goodman Director Ivy Barsky. “Hopefully now everyone will know it and be inspired by this really transformative man.”

In addition to Rosenwald’s induction, the museum honored three men and a woman whom Barsky called “modern-day Rosenwalds.”

Sherry Lansing, the former CEO of Paramount Pictures who previously become the first woman to head a studio when she ran 20th Century Fox, was celebrated. Her foundation partners with the Los Angeles Unified School District to help with special needs training for teachers in science, technology and math.

She was joined by Daniel Rose, whose Harlem Educational Activities Fund has been instrumental educating students in the inner city and preparing them for the future.

And two men with strong Philadelphia ties also were honored.

For both Joseph Neubauer, former chairman of Aramark Corp., whose foundation played an integral role in developing entrepreneurial leaders, and George Weiss, who started “Say Yes to Education” at Belmont Elementary School 29 years ago, which has since grown to now incorporate 140,000 students in five communities, this was a special occasion.

“It’s recognition of a lifetime of achievement of giving back, which is what I’m all about,” said longtime Philadelphian Neubauer, who rarely grants interviews. “I was born in Israel. I came here as an immigrant, and everyone’s been very good to me. That’s all you need to know.”

As for Weiss, a trustee at the University of Pennsylvania since 1987, it stirred pride in his Jewish roots.

“My grandfather was a cantor in Austria and was going to come to New York,’’ explained Weiss, who said he became a Yankees’ fan in Boston because the owner of the Bronx Bombers in the 1940s and ’50s also was named George Weiss. “When the Titanic sank they got nervous about taking a ship to the U.S., so they didn’t and were lost in the Holocaust.

“So it’s nice to celebrate my Jewish heritage. And it’s interesting that whenever I talk to my kids — I’m talking about my ‘Say Yes’ family — I always mention Judaism.”

Also participating in the Rosenwald induction was Sarena Snider, daughter of late longtime Flyers owner Ed Snider, who was always a strong supporter of the museum.

She said that support will continue with her siblings, including Lindy Snider, who’s on the Board of Trustees.

“My dad was involved with the museum since its inception,” she said. “It really meant a lot to him. I know how much he cared about the people founding the museum and wanted to preserve these amazing stories. [I know] how much he believed in free enterprise and the American spirit, because he had so much of that spirit in him.” 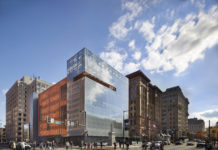