Share
Facebook
Twitter
Pinterest
Linkedin
ReddIt
Tumblr
Mix
Email
Print
Theatre Ariel’s fourth and final salon of the year, called 1-­18: Illuminations, featured a series of 13 short plays written by different playwrights — each somewhere around one, 10 and 18 minutes long, respectively.
Sometimes, it doesn’t take too long to get a point across — in some cases, it only takes a minute.
Theatre Ariel’s fourth and final salon of the year, called 1-­18: Illuminations, featured a series of 13 short plays written by different playwrights — each somewhere around one, 10 and 18 minutes long, respectively.
Founder and artistic director Deborah Baer Mozes came up with the idea based on the importance of numbers in Judaism.
“One, 10 and 18 are all significant numbers in Judaism. I thought it would be fun to do plays that are one minute long, 10 minutes long and 18 minutes long,” she said, with one representing echad, or one God, 10 referring to a minyan, and 18 meaning chai.
“The whole evening very much represents what I feel contemporary Jewish theater is about and should be about,” she continued. “It brings to light various styles and forms and themes, and really reflects the vision of Jewish theater that I have and that Theatre Ariel has.”
Following the performances, Baer Mozes led a discussion with the audience on the themes and correlations found in the plays.
Each of the plays touch on different aspects of Judaism on a deep, engaging and thought-provoking level. Two more performances will be held on May 21 and 22 at locations along the Main Line.
“The intimacy of the performance and the ability to have conversations with each other and the artists after the show just makes for a really engaging evening,” she added.
And with a different audience each night, the discussions are never the same as they get to engage with the actors and the playwrights.
One of three playwrights in attendance, Dennis Moritz, discussed his more-or-less 18-minute play, White Faced Lieutenant, which was based on his father’s life.
“My father was imprisoned in Japan in World War II,” he said, “and it’s a prayer in which the character reconciles himself to the torture and incarceration, and also the fact that he was a bombardier and part of B-29 crew who killed a lot of people.”
Moritz said he was always affected by the lighting of the yahrzeit candles and remembering people who died, so his father’s story impacted him deeply.
“I was drawn to the prayer service, and I thought it would be interesting and very appropriate to enclose his story inside the prayer of remembering the people we knew who died,” he said.
During the play, the character actually lights yahrzeit candles for the people he knew who died and also who he killed.
His father never received counseling for his post-traumatic stress disorder and rarely talked about his time as a prisoner of war.
“He told me about 10 years before he died that he never slept,” Moritz added. “I think my father was very much aware of the destruction of war and how we participated in it. It upset him a great deal.”
Moritz hoped people learn to value their lives and those around them from this unconventional play.
On the more conventional side comes a play about fathers and daughters.
Ken Kaissar’s roughly 10-minute If Not Now follows a woman having her last conversation with her father before he dies.
She voices her frustrations with him over the fact that he doesn’t recognize anything bigger than himself and puts all his attention on material items like his iPhone.
She offers her criticism about it, but it turns out it’s the last thing she says to him.
Kaissar said he was inspired by a Jewish story about a group of people who were so devoted to God that they swore off all material things.
“The whole idea of that story was that they were doing the wrong thing,” he said. “God didn’t intend for us to swear off the material world. He provided the material world for us to make use of it.”
In that regard, he created a modern adaptation.
“It’s a touching story about family, about fathers and daughters — or really parents and their children — and just the judgment we pass on how everybody lives their life; the failing to see the beauty in someone else’s life and judging them for not living up to something that you want them to be,” he said.
On the other end of the spectrum, Louis Greenstein’s A Muse: Journeys in American Jewish History chronicles a “word-for-word interview” he conducted with Carolyn Goodman, the mother of Andrew Goodman who was murdered during the civil rights era.
A one-minute scene was performed for this salon, but Theatre Ariel actually commissioned Greenstein to write it more than 15 years ago.
“It’s been a long time since I saw this,” he laughed.
It has since been appointed as a permanent exhibit at the National Museum of American Jewish History.
“I put on my reporter’s hat and just took down the words and constructed them into the show,” he said. “It’s true. It’s real life, it really happened. It’s biographical, and other parts of the show are equally as strong and good.”
But Greenstein said he hoped the audience realized that the struggle is still ongoing and it is “not contained or constrained to one ethnic group or religion or race.”
“It’s a story about the Jewish participation in the civil rights movement, which is arguably the most important historical time that I personally have gone through,” he said.
Contact: [email protected]; 215-832-0737 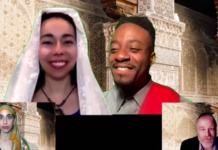