The lights in the studio room at WHYY dim. A small stage is set up on the front left side before an audience of more than 50 people, and the red stage light contrasts with the forest green gown Lady Macbeth wears as she tries to calm her husband.

The couple faces each other, trading bloody daggers that were just used to kill King Duncan.

For the audience, this short scene gives a glimpse into the production of William Shakespeare’s famous tragedy Macbeth being staged at the Philadelphia Shakespeare Theatre.

For Dr. Dan Gottlieb, as the audience’s applause dissipated, it was a cue to invite the notoriously ruthless couple to his “office” for a psychotherapy session.

Better known for his program “Voices in the Family” on WHYY and author of six books, Gottlieb held an amusing yet serious and enlightening therapy and counseling session for the Macbeths during an event, “Voices in the Family: Macbeth on the Couch,” in partnership with the Philadelphia Shakespeare Theatre on April 19 at WHYY Studios.

The Jewish themes of forgiveness and not being judgmental were key as he interviewed the murder-happy literary couple, as portrayed by actors Annabel Capper and Rob Kahn, who did the session fully in character and costume.

Throughout the 20-minute session, Gottlieb delved into the Macbeths’ backgrounds, from their childhoods — which Macbeth did not want to talk about — to their marriage and what happened to them as a couple after all of the deeds they committed throughout their story.

There were humorous bits that led to greater insights of each character. At one point, Gottlieb turned to Macbeth and said: “I want to talk to you about your rage.”

While the audience laughed, they also learned more about his family background — particularly his strained relationship with his father — and why he became the war hero-turned-murderer and how it affected him.

Lady Macbeth, too, dug into her past. When asked where her hunger for power came from, she answered that she never saw it as power but more as “purpose.”

Asking these questions and having the discussion for Gottlieb was a way to “find the beating heart” in those he is helping.

“My agenda in therapy is always create safety and find the beating heart, in that order,” he said after the event.

He did not go into the interview with the Macbeths with any expectations; in fact, he hardly looked at his notes.

“I knew what I wanted to know about: There was love in the relationship, how it was manifested, their families,” he said. “I alluded to it with my comments after the first act, that all of your turmoil after the murder — there’s a moral compass in there. At the deepest level, these are moral people, as crazy as it sounds.”

He had done a previous interview with another character whose moral compass was questionable at best in a past partnership with the PST when it performed Othello a few years ago. He conducted a therapy session for the play’s villain, Iago — arguably one of the greatest villains ever written.

While not an “unfan” of Shakespeare, Gottlieb had to do his research on the character and the story, as he wasn’t too familiar with it. (“It’s like trying to read a foreign language without a translation,” he said of Shakespeare’s writing.)

“This [Iago] is one evil dude,” Gottlieb said. “My agenda with Iago was the same it was with Macbeth and Lady Macbeth — it was to find the human heart behind the words and behavior. When we were debriefing, I said to him and the audience that I had an experience with him that I never had in my whole life, and I’ve been doing this for 40 years. I could see and feel the beating heart in there, but I was scared to pursue it.”

With the Macbeths, he did speak with them briefly beforehand about some of the topics he wanted to explore, so they could be prepared — particularly when talking about family history —but most of the discussion was in the moment.

There were a few times where Gottlieb was surprised by the actors’ responses.

“I enjoyed getting to know these people, who were difficult to get to know,” he said. “When I ask a question, I enjoy when I don’t get an answer right away because I know that question is taking them into territory they’ve never explored before. [Macbeth] was the one that felt less safe, and he was the one who took most risk in the session. Lady Macbeth was, in my mind, more open than I thought she would be.”

When he began the session, Gottlieb asked each character if there was anything he could do to make them feel more comfortable. Macbeth responded bluntly, “No.”

Talking about the motivation behind killing King Duncan and how they felt afterward was particularly eye-opening. Lady Macbeth discussed how she felt as though she lost her husband in that moment.

The session might have helped others see that there is a heart in Lady Macbeth, whom many believe has “come down in history as just a horrible witch,” audience member Jean Curnow said afterward.

Curnow, a retired English teacher from Millville, N.J. who taught a class specifically on Shakespeare, said she has always supported Lady Macbeth — someone had to, she laughed.

“She was just trying to support her husband, she loved him,” she said.

For the actors, the conversation helped them further understand their characters.

“It was actually very stirring,” Capper said during the debriefing. “If you are connected to your character, which I hope I am with Lady Macbeth, and I know Rob [Kahn] is with Macbeth, you can’t really separate the personal from this imagined, created character. Even though it was a session in character, it didn’t really feel performed; it felt very authentic.”

For Kahn, digging into how hearing the voices in Macbeth’s head and how it felt as though Macbeth could have post-traumatic stress disorder (PTSD), the discussion will make it harder for him to perform the scene now, he said.

“It’s been easy for ‘Rob’ to disconnect that idea where the blade went into [Duncan’s] neck to think, ‘Oh, he’s really been scared of the voices and hearing the sons wake up and the disembodied voice that’s telling him what he’s hearing,’” Kahn said.

“That’s the first time I really was forced to visualize that to such a degree, and that’s going to make that scene really tough for me from now on. So, thank you,” he continued as the audience laughed.

Talking with these characters and stripping the exterior identities of the characters so he could speak candidly with them without judgment was a very Jewish theme for Gottlieb.

“I thought the theme was all about Jewish value — finding the good in people and not judging simply based on behavior,” Gottlieb said. 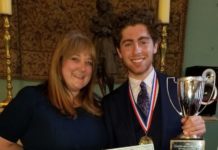