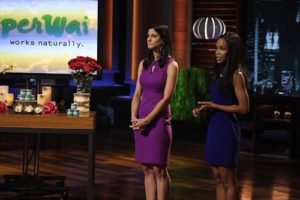 They attempted to profit from a lemonade stand, though Edelstein said Ribner’s parents were irritated that the ingredients cost more than their earnings.

“We learned our first business lesson that day at the tender age of 9,” Edelstein joked.

Since then, their business model has expanded from refreshments to deodorant.

Edelstein, 27, from Lower Merion, and Ribner, 26, from West Mount Airy, made a deal on a December episode of ABC’s Shark Tank for their product PiperWai, an all-natural deodorant made with activated charcoal.

They were looking for a $50,000 investment. Many entrepreneurs attempt to make a deal with the “sharks” — venture capitalists looking to exchange seed money for a stake in fledgling enterprises — on the show, but only some succeed.

Two out of the five sharks were willing to take part in their business, and the duo ultimately made a deal without breaking a sweat for that $50,000 investment from businesswoman Barbara Corcoran in exchange for a 25 percent stake in PiperWai.

The activated charcoal is extremely absorbent and neutralizes odor. The deodorant — a gray cream — comes in a jar and sells for $11.99 online. A stick version is on track to be rolled out in March.

They launched the company almost two years ago after some personal experimentation with homemade deodorants.

Both Ribner and Edelstein have long preferred green beauty and non-toxic personal care products, but the one item they couldn’t find that actually worked well was deodorant.

“I thought, ‘Huh, I wonder if I can make a natural deodorant that would stand up to Ribner?’ ” Edelstein laughed.

Edelstein graduated from the University of Pittsburgh with a degree in psychology and a minor in theater with a leadership certificate. After career-hopping, she got her real estate license in 2013.

Shortly after, she started concocting her own deodorant recipe in her kitchen. To her surprise, it worked.

She gave a sample to Ribner to use on her monthlong service trip to Guyana. Ribner didn’t take any other deodorant with her into the steamy South American weather.

“We were both trying to lead these healthy lifestyles, and once I got a sample, I was really skeptical — as most people are with natural deodorant.” Ribner said. “I was really surprised that it held up in this incredibly hot and humid climate.”

Ribner’s friends suggested Edelstein sell the deodorant, but Edelstein said she wouldn’t do it without her best friend.

The company name is a combination of Edelstein’s family dog and the Wai Wai tribe in Guyana.

“We wanted something that sounded like a cosmetic brand and had personal elements to each of us,” Edelstein said.

Conventional deodorants have traces of aluminum, which studies have linked to breast cancer and Alzheimer’s.

“Additionally, the parabens in a lot of our personal care products have shown up in biopsies of breast cancer tissue, so it’s been proven that it does actually get into your body and circulate,” Ribner noted.

“Our philosophy is, who cares if there is an actual proven link? If there’s a natural alternative that works, why even bother with the potentially toxic stuff?” Edelstein added. “Personally, if there’s a natural option, I’m going to use that.”

After the success of their Shark Tank debut, sales spiked.

“Our company that was selling a few hundred jars a month completely exploded with over a million dollars in sales in a week,” Edelstein said.

But for the first 16 months of PiperWai, Edelstein and Ribner handcrafted 300 jars at a time in Greensgrow Farms’ community kitchen in Fishtown.

“It felt like a lot at the time, but now it’s nothing compared to how much we’re selling, but we put in that sweat equity for 16 months — literally,” Edelstein joked.

The deodorant is now made in a facility in Conshohocken, producing almost 10,000 jars a day.

In the beginning of PiperWai, Edelstein became a fellow of Tribe 12, where she worked with a personal volunteer coach and other young entrepreneurs during a six-month program.

Tribe 12, which is sponsored by the Jewish Federation of Greater Philadelphia and partnered with PresenTense, helps them take their businesses to the next level and teaches them about fundraising, budgeting and funding strategies.

“Being an entrepreneur takes a certain kind of crazy,” Edelstein said. “I just wanted to surround myself with that type of person, and that’s exactly what I got out of the fellowship.”

Danielle Selber, project manager of Tribe 12, met Edelstein at last year’s alumni event that allowed fellows to pitch their ideas in front of investors, which happened to have a Shark Tank theme.

After the event, Edelstein became a fellow from January to June of 2015.

To support their success, Tribe 12 hosted a viewing party of Edelstein and Ribner’s episode, with more than 100 people in attendance.

“It feels amazing to have seen the rise of PiperWai and been a part of it,” Selber said. I think that it’s really inspired our fellows … to see how far someone can go in just one year.”

As a Tribe 12 fellow, Edelstein’s business model is also driven by Jewish values.

Edelstein and Ribner donate jars of their deodorant to cancer patients because the aluminum in traditional deodorants can be toxic during radiation treatments.

They also support Back on My Feet Philadelphia, an organization that uses running to inspire homeless people to make positive changes in their lives.

“They thought there could be a partnership there, so we donated 10 percent of sales for everyone who used a coupon code and gave them 10 percent off, too,” Edelstein said.

They will choose a new charity to benefit quarterly that also has a connection to their brand.

“What we look for in our fellows is a connection to some kind of social good mission,” Selber added. “PiperWai really has a strong value system at its core — they want people to live healthier lives and want to help them do it.”

Steven Stone, who sits on the board of directors with the Hebrew Free Loan Society, said the organization has helped more than two dozen businesses in the two years since the program started funding entrepreneurs.

“It certainly provides real opportunities for people to move forward in what many have called the ‘new age of entrepreneurialism,’ ” he explained.

When the board heard about Edelstein and Ribner, Stone said, the response was that it was exactly the kind of thing they should be funding.

“Their dynamic, their interpersonal relationships, their energy level was so incredibly high, their enthusiasm — we were certainly intrigued,” he added.

After the show, Edelstein and Ribner were able to pay back the 36-month loan.

“We were fortunately able to pay it back quickly enough that it enables another small business to benefit from the Hebrew Free Loan Society in the way that we had, but a lot quicker now that that money is back in the system,” Edelstein said. “It feels great to be doing something that is welcomed by our tribe.”

Edelstein said being responsible for their own success is their biggest motivator.

“I don’t think I can go back to a desk job at this point,” Ribner said. “I love working for myself, for the two of us, and having so much say in the direction of the company.”

Edelstein seconded the notion. “I’m awful at working for other people,” she said. “I once heard the quote, ‘If you don’t follow your dreams, someone else will hire you to build theirs,’ and that didn’t sit well with me. Being an entrepreneur just makes sense for me.”