The new religious school director at Congregation Beth Or has a truly old-school background.

As a longtime professor of medieval literature, Aaron Nielsenshultz never imagined working in a synagogue — or any type of Jewish establishment, for that matter. He grew up as a non-observant Jew and the most Jewish exposure he got as a child at home was when his father, Eric Nielsen, occasionally spoke Yiddish. (Nielsenshultz’s last name was originally Nielsen; when he married his wife, the former Yara Shultz, they merged names.)
These days, Nielsenshultz has moved on to his own Jewish Renaissance — he was recently named the director of the religious school at Congregation Beth Or in Maple Glen.
“I’m where I am because it’s the right place to be,” Nielsenshultz said. “My whole life now is Judaism.”
Nielsenshultz, 42, a native of San Diego, Calif., taught medieval literature and writing at Cal State San Marcos in San Marcos, Calif., and University of California Riverside, in Riverside, Calif., from 1995 to 2005. It was during that time, as he researched religiosity and heretics in the Middle Ages, that he first felt the awakenings of his Jewish identity, fueled in large part by his discovering just how prevalent anti-Semitism was during the Middle Ages.
He decided to begin learning about Judaism and Jewish history. Finding his great-grandmother’s green card from Denmark really sparked his interest, he said.
“I didn’t want anybody else’s texts — I wanted to study ours,” he said.
His wife was surprised by his choice, but supported him.
In 2005, they moved to Kansas City, Kan., to be closer to her family. While he studied Judaism with Rabbi Mark Levin at Congregation Beth Torah in Overland Park, Kan., he also served as the assistant director of curriculum at Baker University in Baldwin City, Kan., from 2007 to 2009.
Two years later, the shul hired him as its informal youth director, where he served until 2008. It was his first job in the Jewish community and, he admitted, it was a challenge getting kids to come to events.
“I was totally nervous — and I was completely unsuccessful,” Nielsenshultz recalled.
Also, in 2007, he began teaching Hebrew school. He loved to educate children and was still learning about Judaism at the same time.
“The only reason to have knowledge is to share knowledge,” he said.
From 2012 to 2015, he served as the special program coordinator at Congregation Beth Torah, school director, conversion class coordinator for the Rabbinical Association of Greater Kansas City and was the 2012 co-recipient of the Kansas City Jewish Educator of the Year award.
His path from the Midwest to Maple Glen ran through Atlanta. In February, he attended a youth engagement conference there, where Beth Or Rabbi David Gerber gave a presentation on how to reach youths today.
Gerber remembers Nielsenshultz stood out in the way he was asking questions and suggesting ideas. “He had this presence about him,” Gerber said. “He was very engaging in the way he spoke.”
Afterwards, Nielsenshultz introduced himself and Gerber asked him what he did. When Nielsenshultz told him, Gerber let him know that Beth Or was looking for an educator with his qualities.
“I told him, ‘Great, I’ll tell my friends,’ because I wasn’t looking for a job,” Nielsenshultz said. “A month later, I was making plans to move to Philly.”
Gerber said he knew Nielsenshultz had a good reputation, so for the next couple of weeks they spoke on the phone in the hope he could convince Nielsenshultz to come to Philadelphia.
“When I met him, it was fairly clear to me that he was our guy,” Gerber said. “Culturally he is a perfect fit. He is a hard worker and a lover of Judaism.”
When he returned to Kansas City and told his wife about the opportunity, she urged him to pursue it. He told her he didn’t want to move, but she said he was crazy to not look at it.
“She said, ‘You can’t close this door,’ ” Nielsenshultz said. “ ‘This door opened for a reason.’ ”
So, he took a leap of faith and accepted the job in Philly. He knew a bit about the area
because he lived in Virginia, Maryland and Washington, D.C. from 1976 to 1982.
He moved to Philadelphia in May and has been embraced in the community and the shul. He has met with students, teachers and parents and many have invited him over for dinner.
“The first time you leave a place it feels impossible,” he said. But, he added,  “home is where you make it.”
Contact: [email protected]; 215-832-0747. 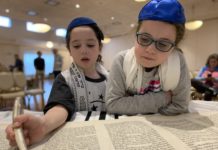 And Away We Go: Beth Or Rabbi a Source for Jackie Gleason Play