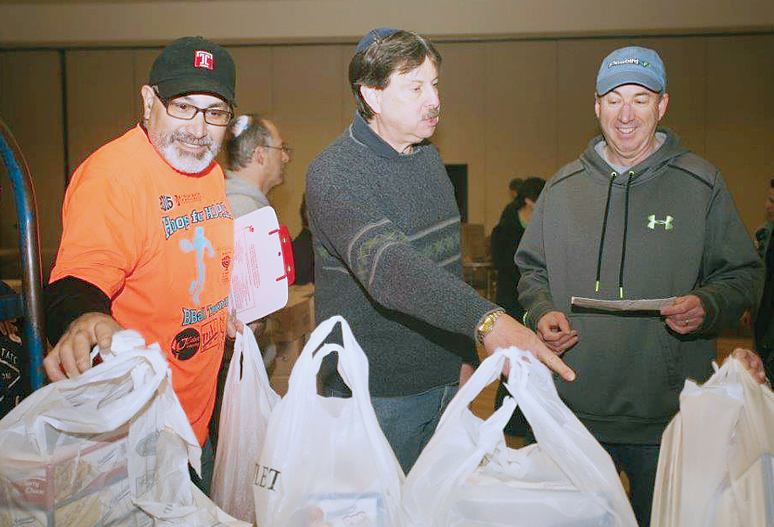 Project H.O.P.E., in its 18th year, provided essential Passover foods to 600 families in preparation for the first seder.

“I wish to thank Project H.O.P.E. — You have certainly made it possible for me and my beloved son to have a joyous Pesach through your generosity of the kosher food. As a Holocaust survivor, I am especially appreciative. If there were more people like you, the world would be a much happier place.”

“During World War II, I lived in the [concentration] camps in terrible conditions but always with hope. I thank Project H.O.P.E. for sending me Passover food … I am glad that good people care, that I should never be hungry again.”

These are just two of the numerous thank-you notes received by Project H.O.P.E., an organization dedicated to providing Passover-friendly foods to those in need in the Philadelphia region, since its inception in 1997.

Samuel Domsky, chairman and founder of Project H.O.P.E. (Helping Our People Everywhere) was especially proud of this year’s Passover distribution effort, which took place on Sunday. It is the chai, or 18th year, of his group providing much-needed Passover food to those who otherwise would not have the ritual foods for their seder.

“Some people assume Jews aren’t in need. That’s not the case,” he said, as his family and hundreds of others gathered at Temple Sinai in Dresher to pack and deliver food to families across the region. “Families, the elderly, single parents — all need food to celebrate Passover.”

For Domsky, Project H.O.P.E.’s mission is rooted in the meaning of the holiday itself. “As we read in the Passover Haggadah, ‘Let all who are hungry come and eat.’ Food is an integral part in the celebration of Passover, the Festival of Freedom. I want to make sure that anyone who wants to observe the holiday is not deterred by the expense.”

The program began in 1997, when members of B’nai B’rith, a Jewish fraternal organization, were charged with finding a way to help their fellow Jews at Passover. Domsky, the organization’s regional chair for community action, and 15 volunteers were determined to meet the challenge.

Working out of Domsky’s home garage in Dresher, Project H.O.P.E. was born. “That first year, we successfully delivered food to 75 needy families in the Philadelphia region,” he recalled.

The number of those needing assistance, as identified by Jewish Family and Children’s Service and the JCC Klein Branch, has continued to grow over the past 18 years.

This year, Project H.O.P.E. and its 300 volunteers provided essential Passover foods to 600 families in preparation for the first seder on April 3.

“Sam does a great job of raising money and pulling it all together,” said Steve Pilchik, the organization’s logistics coordinator. “It’s really his baby.”

Pilchik maps out the routes for the drivers. “We cover 60 ZIP codes throughout Philadelphia and surrounding communities,” he explained. “It’s quite the balancing act.”

This year, organizers spent months raising some $30,000, securing corporate and individual sponsors, obtaining food donations, and coordinating volunteers. It all came together on March 29 at  Temple Sinai, the project’s home base for the past seven years.

For Domsky, the effort has been a family affair. His three children, Alex, 24, Sara, 22, and Aaron, 14, have grown up with Project H.O.P.E. and continue to be instrumental volunteers.

“We help with registration, logistics and pretty much anything and everything that needs to get done,” joked Sara.

“Aaron has never known a world without Project H.O.P.E. He was born into it,” said his father.

“It’s important that at a young age, they are learning about helping people less fortunate and see that they can make a difference,” she said.

Elana Rivel and her family have been volunteering for years. Her children, Max and Zoe Halperin, understand the mitzvah that they are performing. “Project H.O.P.E. is a popular Bar or Bat Mitzvah project. Many kids who first start out age 13 continue volunteering through high school and college,” she said. “It’s wonderful to see.”

Five-year-old Danny Harnick was trying to hold his own alongside older participants. He proudly carried his empty bag from station to station, in assembly-line fashion, gathering the essential Passover items to be delivered.

As the bag got too heavy, his older brother Josh, 9, was there to assist. Parents Matt and Jane worked alongside their boys, kvelling in doing this first-time mitzvah of packing staples like matzah, gefilte fish, kosher chicken, eggs, applesauce, canned tuna and coffee.

“We went to eight homes in the Northeast,” Jane Harnick said. “The recipients were so grateful for the food and got a real kick from seeing the boys. I think we began a new family tradition.”

Karen Wendkos is a freelance journalist. She currently resides in Dresher.

Opinion | Seeing Myself Reflected — in a Screen