A visiting Judaic studies fellow explains why he's conducting new research on the more than 250,000 displaced Holocaust victims who spent years in refugee camps after the war.

They are not as arresting as other, more well-known figures tabulated from the carnage of World War II, but they are staggering none­theless: From 1945 to 1952, more than 250,000 Jewish displaced persons lived in refugee camps in Germany, Austria and Italy, according to the United States Holocaust Memorial Museum. Yet, in the opinion of a non-Jewish Italian professor of Hebrew language and literature, who only started investigating the history of DP camps because of a side trip through the Ionian coast, there has been too little dedicated academic research on the subject of what happened to a quarter-million Jews immediately after the war.

Fabrizio Lelli, a visiting fellow at the Hebert D. Katz Center for Advanced Judaic Studies, has been traveling from Southern Italy to Israel and the United States over the last decade, following some of the same routes taken by Jewish re­fugees leaving Italian DP camps, though in a much less arduous fashion.

As Lelli explained during a Jan. 27 program at Congregation Mikveh Israel sponsored by the Consulate General of Italy in Philadelphia about this historical period, the residents of the DP camps had suffered great trauma, either did not want to or could not go home and were now aiming to move to the United States or Israel. In the meantime, from 1944 to 1949, many were stuck in a Mediterranean limbo, trying to recover from the war but without knowing where they would — or could — go next.

Lelli, a professor at the University of Salento, describes this as an overlooked moment in history. Since 2000, he has been collecting documents and personal testimonies from World War II refugees to tell their stories.

“Unfortunately, to my knowledge, this period has mostly been unknown — it needs to really be rediscovered,” said Lelli, whose primary academic research focuses on Medieval and early modern Italian Jewish literature.

By speaking at such an event on International Holocaust Remembrance Day, building a website containing refugees’ stories and helping to produce a documentary, Lelli said, he is not only trying to educate people about post-Holocaust reconstruction but also to encourage those with connections to the DP camps to come forward with their stories and spur greater academic research into the period.

“There is still plenty of information that awaits scholars to dig out,” said Lelli, 50, who is on his fourth stay at the University of Pennsylvania.

While much of the existing research into the DP camps and refugees has focused on the macro level — the role governments and Jewish organizations played in shaping refugees’ lives — Lelli said he is more interested in the micro, “the human experience, the feelings of those people and how they think that experience helped them survive in later years.”

Lelli inadvertently stumbled onto the history of the Italian DP camps, which operated under the auspices of the United Nations and the Allied Forces with the support of international Jewish organizations, and ultimately housed more than 20,000 Jews, according to Yad Va­shem.

In 2000, he was visiting friends along the Ionian Sea coast in Southern Italy. One day, they took him to a dilapidated building that was slated for demolition. It contained three murals painted by a refugee depicting the Zionist dream of a Jewish state. Lelli’s friends asked him to conduct research on the DP camps in the area as part of their effort to convince the local municipality to preserve the murals.

Seeing the remnants of the DP camp spurred Lelli to recall conversations he had with Holocaust survivors in Israel and the United States years earlier about their time in Italy after the war, and he realized they had likely been in such a camp. He started contacting them, asking for interviews and requesting old letters and documents that provided a glimpse into their daily lives as refugees.

In addition to collecting that information, Lelli started looking for other published material about the DP camps. He found there wasn’t much.

“When we deal with the Holocaust and the memory of the Holocaust, we generally remember the tragedy of the situation and then we skip to the period of the birth of Israel and the departure of DPs to the United States,” he said.

Many of the refugees aimed for DP camps in Italy, rather than ones in Austria or Germany because of their Zionist aspirations and how much closer Israel was to Italy, said Susanna Kokkenen, who works in international relations at Yad Vashem and wrote her doctoral thesis at Hebrew University on Jewish refugees in postwar Italy.

She agreed that there has been a dearth of research on these people of “remarkable human spirit.”

“Whether they had been surviving in the ghettos or in the camps, they had been through the most terrible time, but within a few months they already had organized schools and Oneg Shabbats. They were able to have weddings and to have different sports teams,” said Kokkenen.

Through his Jewish Refugees in Apulia project, Lelli has collected the stories of 36 refugees and published their biographies on his website. His work also played a role in the successful effort to convince the Italian municipality to preserve the murals, which have been restored and now sit in a museum near the original house.

He has not yet found anyone in the Philadelphia area with connections to the DP camps, but he is hoping to find refugees or their family members during his year here.

The program at Mikveh Israel also included a video clip of Al Finci, a Se­phardic Jew from Los Angeles, telling the story of his time in an Italian DP camp.

A native of Sarajevo born in 1929, Finci and his family fled what was then Yugoslavia shortly after the Nazis invaded the country. They spent the rest of the war in Montenegro, Italy and Switzerland. When the war ended, they traveled first to Parma, Italy, and then to a DP camp in Santa Maria al Bagno on the Ionian Sea, where they spent one year. Finci said that his family had been fairly wealthy before the war but had to start over with almost nothing in unfamiliar surroundings.

“You had a variety of people there with totally different backgrounds,” said Finci, who worked as a nurse’s aide at a hospital. “As a Sephardic Jew, you put me together with an Ashkenazi Jew from Poland, and there is a cultural abyss. The question is, how do you interact?”

Finci added during a phone interview that a sense of impermanence permeated the camp experience. Since everyone would soon be leaving, the question became, how much should you invest in relationships?

The answer, for him at least, was just enough. He reconnected at a camp with a teenage girl, Rose, whom he had met as a child in Sarajevo. They lost touch when they left the camp until, through a fellow former DP camp refugee, the two again met years later in Los Angeles and subsequently married.

“Everything was temporary,” said Finci, who moved from the camp to Rome and then, in 1950, to the United States. With the establishment of the state of Israel in 1948, the need for the camps diminished and almost all of them were closed by 1952. “Everyone who was in that displaced persons camp planned to go somewhere else — the United States, Palestine, South America — but no one was going to be there forever.” 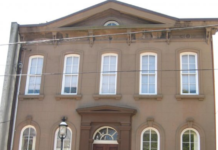