Share
Facebook
Twitter
Pinterest
Linkedin
ReddIt
Tumblr
Mix
Email
Print
The situation is tricky. An interfaith couple, soon to have their first child, have worked out all the details about how they'll raise the baby religiously. There's just one problem: No one's taken the time to let the grandparents in on the faith their newborn grandchild will follow.

Grandparents are an integral part of the familial equation, and their role is being analyzed more closely by interfaith groups and synagogues.

The subject has even been at the forefront of recent major programming. For example, just last weekend, Faithways: Interfaith Support Network of Jewish Family and Children's Service held such a conference at the University of Pennsylvania Hillel House, exploring interfaith family connections in the Jewish community; the role of grandparents was such a hot topic that it warranted a workshop of its own.

Indeed, the influence of grandparents can add to or detract from the relationships they have with their adult children, depending on the approaches taken by the parties on all sides.

All too often, however, tensions tend to seep into the interactions between grandparents and parents, according to Rabbi Kerry M. Olitzky, executive director of the Jewish Outreach Institute and co-author of Twenty Things for Grandparents of Interfaith Children to Do with Paul Golin. While some grandparents are afraid of "saying or doing the wrong thing" with their grandkids, some adult children may fear that grandparents are trying to undermine how they've decided to raise their offspring.

A crucial tenet in preserving the peace among all parties is communication — done early and often, insist experts.

The ability to "express uncomfortable things comfortably" becomes a tremendous help, said Rabbi Mayer Selekman, who ran groups for interfaith couples for 28 years while he was the rabbi at Temple Sholom in Broomall. He is also a grandparent to an interfaith family.

Those open lines of communication need to extend throughout the generations. Couples often hammer out interfaith issues at home and don't reveal their plans to extended family, said Linda Kanner, coordinator of Faithways, who emphasized that they "need to inform their parents about what they intend to do."

And, of course, it goes without saying that grandparents need to respect the wishes of their adult children, and proceed to "talk with them openly," she added.

"We know that grandparents have the potential to be significantly impactful on the religious identity of grandchildren," said Olitzky, and the grandparents own relationship with their faith can be a strong influence.

Kanner noted that grandparents should try to provide as much of "the richness of Judaism" that they can, which is how the grandchildren benefit. Fostering an air of competition among religions only causes grandchildren to withdraw, she added.

"Grandparents can provide a history, a culture, an understanding," said Kanner. They can talk about the State of Israel, they can make a Shabbat dinner — and especially relevant right now, they can host a Passover seder. "They can show their grandchildren something that is really beautiful about the Jewish religion."

For grandfather Herb Levine and his wife, modeling a commitment to Judaism is something they share with their children and grandchildren: "If it's Shabbat, we celebrate Shabbat."

"Sensory experiences are very important at this age," he added, and the act of lighting Shabbat candles can be a powerful image for small children.

His daughter is in a lesbian interfaith partnership, and her partner is interested in learning Hebrew. "We've been consistently welcoming of her," he attested. Levine would like to help them become a Jewish family, he added, so he works to model the faith for his granddaughter, which he hopes will evolve over time.

Still, Olitzky noted not to encourage grandparents to undermine the identity established by a child's parents. "Children, irrespective of how they're raised and irrespective of what the conditions are, will make decisions on their own when they become adults," he said.

A controversial topic in many interfaith households is deciding how to celebrate the holidays of non-Jewish members of the extended family. "A lot of people get nervous about going to other grandparents' house," said Kanner, but "I think people don't give children enough credit."

Kids raised as Jews, she felt, understand that exposure to the holiday of a non-Jewish family member isn't a challenge to their beliefs. As she acknowledged: "Kids are more savvy than we give them credit for." 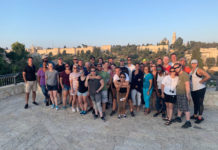