Last week, we heard Moses' speech to Pharaoh — and it was like a shot heard 'round the world: "Let my people go that they may serve Me."

But were I to search for what would become the essential and defining tagline for this people — this union of Jews — I have to turn to Moses' speech in the portion this week.

Let's put this in context.

Moses, the reluctant but great leader of the Jews, is now addressing a people who'd been humiliated, enslaved and subjugated for 210 years. They'd just lived through the 10 plagues — and, contrary to our popular understanding, the rabbis suggest that 80 percent of the Jewish people of that day did not survive.

As discordant as it may sound, Egypt was the first holocaust our people suffered. The survivors, as it were, had now witnessed the discomfiture of their oppressors and were preparing to embark on a major journey — one that would entail the acceptance of a sacred charge: to become a "kingdom of priests and a holy nation."

So on the eve of this liberation, what would you say to this nascent and fledgling people? What would be your "state of the union" message?

Worry About the Kids

His wasn't a call to seek revenge or even a call to power. No, Moses speaks of the more essential and fundamental things: first, of memory, and then, more pointedly, of the future, of children and learning.

"When your child will ask you tomorrow" …

"When your children will inquire of you, you will be able to say and instruct them" …

"And you will dialogue with your children."

In a word, Moses delivers a powerful and eloquent response. Asked, in a sense, how this "state of the Jewish union" will survive and thrive, he answers with a single word — education.

A people can only be free and a society can only flourish when education is the passion. This is the hallmark of dignity. This is the essence of power. This is the Jewish message.

Interestingly enough, universal education was not instituted in England until 1870, and it arrived even later to the United States. The Talmud tells us that universal Jewish education was already instituted by the end of the Second Temple period: "Remember for good the man Yehoshua ben Gamla … he instituted that teachers be appointed in every province and in every city."

Is it any wonder, then, that Time magazine determined that the most seminal and significant event of the millennium was the advent of Gutenberg's printing press, some time in the late 15th century.

Because then, knowledge and ideas could be writ large and more widely disseminated. People could become "educated." What an enlightened discovery!

But isn't this what Moses was teaching the Jewish people several thousand years before that?

How can we align ourselves today with Moses' message?

If it was ever legitimate to make a so-called New Year's resolution, it would be this: Read one more Jewish-themed book this year, take one more Jewish-studies course, engage in a serious conversation with your rabbi, learn Hebrew, sign up for just one adult-education session at your synagogue.

So, if we were to assign an essential tagline to the "state of the Jewish union," all we'd have to do is take our cue from Moshe Rabeinu; he was, after all, our greatest rabbi.

Rabbi David Gutterman is the executive director of the Vaad: Board of Rabbis of Greater Philadelphia. 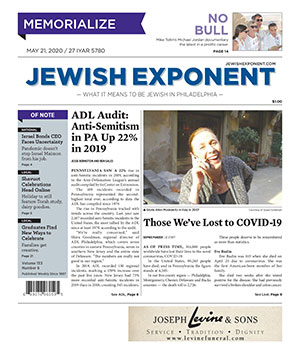