I prayed that the Nazis wouldn't take her.
I sat in the Prince Music Theater watching EgoPo Classic Theater's production of The Diary Of Anne Frank, and I thought that maybe, just maybe, the story would have a different ending.
I first fell in love with Anne Frank when I, too, was a 13-year old girl who wanted to be a writer. In Anne, I found a friend, just as Anne found a friend in her diary. Anne was a girl who was just like me. Creative. Rambunctious. Impatient. Rebellious. Curious.
I went to the theater ready to visit with Anne. This time, I came to the story as an adult. Now, I am old enough to be Anne's mother. I was prepared to see Anne in a different way.
But I was not prepared for the EgoPo experience of Anne Frank. We sat upstairs; the stage was an annex within an annex. The seating was purposefully claustrophobic, arranged so close to the stage that I could have touched Anne, the Franks, Van Daans and Dussel. There was a forced, uncomfortable intimacy. We see them change their clothes, eat, use the toilet, fight, sleep, sing, read, cry, kiss and dream in that annex. They never left the stage — not even during intermission. They were as trapped, just as the Franks, Van Daans and Dussel were. For 2 hours and 15 minutes, the audience lived in that annex, too.
So when the Nazis barged in, it felt like a shocking violation of that safe space. The Nazi invasion of the annex took 45 seconds, but its sudden brutality appalled the audience. When they made Otto Frank get on his knees, we gasped. When they threw Anne across the room, many in the audience moved in their seats, as if instinctually wanting to protect the girl. I wanted to rush the stage, put my arms around her and lead her to safety. But there was no saving Anne.
The stage went dark, but only for a moment. Otto Frank appeared in a spotlight, sitting at the annex's kitchen table holding Anne's diary. In a brief but wrenching monologue, he told us that Anne had been sent to Westerbork, then Auschwitz and finally, Bergen-Belsen. People saw her in the camp, half-naked and half-starved, her head shaved and her body covered with lice. "I am all alone," is what Otto tells us Anne said. "I am all alone."
The sadness and rage of Otto's words engulfed the audience. The man seated next to me stifled a sob and a tear rolled down his cheek. On the other side of the stage, another man pressed his lips together and blinked fast, then reached for the hand of his wife, whose cheeks were already wet with tears. I had found her again — and lost her again. I felt as if we should recite the Kaddish.
Why all of this emotion for a story to which I knew the ending? Because Otto's parental impotence breaks my heart. Because Anne died alone and anonymously, never imagining that she would become a heroine to millions of people. Because I see what Anne could have been: a writer, maybe for a Jewish newspaper.
Because there are Annes all around the world. She is the girl hiding from the Taliban, the Sudanese girl fleeing civil war, and the American girl trapped by poverty and insufficient education. Maybe the way to honor Anne Frank is to save those Annes.
Melissa Jacobs is the senior editor of Inside magazine. 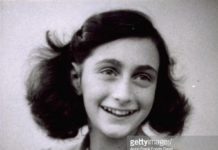