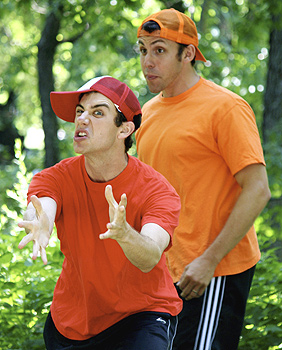 What would happen if two 20-something Jews were asked to entertain hundreds of restless Ramah campers for an hour on a rain-soaked summer day? As it turned out, it was something like midrash meets Monty Python, with a little bit of Mel thrown in — Brooks, that is.

That’s how Andrew Davies and Aaron Friedman — who both spent the summer of 2010 working at the Ramah Day Camp in Nyack, N.Y. — explain the genesis of The Bible Players. The duo use improvisation and comedy to teach the lessons of the Torah.

“That was the day that we realized that performing and creating stories could work well with the way we like to study Torah — where we make it our own and make it personal,” said Davies, a 28-year-old Manhattan actor and educator who grew up in Philly’s Germantown section.

The idea has taken off beyond expectations. For more than a year now, Davis and Friedman have performed their shtick in more than 50 synagogues, JCCs and Jewish camps in the New York City area.

And now they’re bringing their show back home with several local appearances. On Friday, Feb. 24, they will appear at the Robert Saligman Middle School in Melrose Park; and on Sunday, Feb. 26, the two will perform two shows for the religious school at Reform Congregation Keneseth Israel in Elkins Park.

Eschewing elaborate costumes for bright T-shirts and baseball caps, the two deliver hammy interpretations of such biblical stories as Noah’s ark, Jacob and Esau, and Moses and the burning bush. (Moses somehow has a Brooklyn accent and sounds a lot like Woody Allen.)

Last year, the duo performed a Chanukah show at Friedman’s home congregation, Adath Jeshurun in Melrose Park. But the pair, who met as students at what was then known as the Akiba Hebrew Academy, consider this week their true homecoming.

“We are teaching on one foot, summarizing stories and putting them in our own words — and teaching kids as well that they can be interpreters of Torah themselves,” said Friedman.

Davies graduated from Brandeis University while Friedman, a stand-up comedian and Hebrew school teacher, earned his bachelor’s degree at the Albert A. List College, a joint program of the Jewish Theological Seminary and Columbia University in New York City.

He’s also married to a Conservative rabbinical student. “She out-Jewed me,” he quipped.

These two have serious Torah study behind them, and each hopes to share their enthusiasm with their young audiences.

“I think we really want to be honest and authentic about information in the story. We do serious research before we write and perform a sketch,” said Davies.

They said they were thankful to have attended day school, and think it’s more difficult to absorb Torah in a supplementary school setting.

Part of their goal, said Davies, is to promote the use of acting, role playing and improv in both formal and informal educational settings.

“If you teach them improv, that’s games and joys for a lifetime,” said Davies, who became a Bar Mitzvah at Germantown Jewish Centre.

He also noted that, though he attended Jewish day school till college, he’s the child of a mixed marriage; his father never converted.

He said he realizes that an increasing number of Jewish kids these days have one parent of a different faith.

“I’m always acutely aware of that consideration,” he said. “We always want our shows to be very inclusive.”

The longtime friends have no plans to give up their solo stage careers to pursue Bible Players full time. They have synced their smart phone calendars so they never double book a gig.

How big do they think this thing can get? 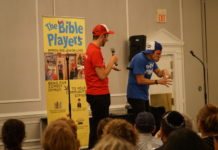