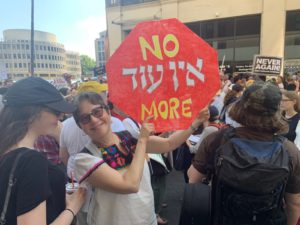 Thirty-three protesters were detained by police after they attempted to disrupt an Independence Day parade in Center City on July Fourth. They were among a group of about 300 people who had gathered for the “Never Again Is Now: Philly Mass Mobilization” demonstration, a Jewish-led action to demand the closure of detention facilities at the United States-Mexico border.

The protest was organized by Never Again Action, a network of locally organized groups across the country that are calling for dissolving U.S. Immigration and Customs Enforcement, or ICE. The group first made headlines on June 30, when 36 of roughly 200 protesters were arrested outside the Elizabeth Contract Detention Facility in New Jersey.

In Philadelphia, the group met outside ICE’s Philadelphia Field Office near the corner of Eighth and Cherry streets at 10 a.m. Protest organizer Pele IrgangLaden was one of several who spoke to the crowd.

IrgangLaden referred to the most recent controversy over the detention facilities at the southern border, saying many people expressed more outrage about the use of the words “concentration camps” than about the conditions of the facilities themselves. Rabbi Michael Pollack, who was in attendance, agreed with IrgangLaden’s sentiments.

“That’s a stupid controversy,” Pollack said. “When you’re arguing about semantics when people are suffering, you’re having the wrong conversation.”

Another speaker was Rabbi Linda Holtzman, an adjunct associate professor of practical rabbinics at the Reconstructionist Rabbinical College in Wyncote. She talked about the Mourner’s Kaddish and the notion of remembrance, arguing that remembering without action is not enough.

“What is happening at our border is despicable,” Holtzman said. “The fact that this happening here and now in our country violates everything I believe in as a Jew, as an American.”

Rilka Spieler, who joined the demonstration along with many other members of the West Philadelphia congregation Kol Tzedek, said the protest was fitting.

“It’s the Fourth of July and we’re supposed to be celebrating freedom, and it’s very obvious that there are a lot of people who are not free in our country, between incarceration and all of the people who we are putting in concentration camps who are seeking freedom,” Spieler said. “We’re celebrating freedom, [but] it doesn’t feel right to celebrate something that people are asking for from us and not acknowledge that.”

At around 11 a.m. the protesters began their march down Eighth Street, chanting, “Never again means close the camps, never again means now” and “shut down Berks,” referring to the Berks County Family Residential Center where undocumented immigrants are held. The protesters took a left onto Arch Street and weaved their way past parked cars until reaching Independence National Historical Park around 11:20 a.m. From there, they began to walk through the park in an attempt to reach the Salute to America Independence Day Parade.

Police scrambled to form a barricade with their bikes to block the protesters, but a group of 33 were able to make their way past police to the parade around 11:45 a.m.. They sat down with arms linked in the middle of Market Street. The 33 were subsequently detained and shuffled into police vans and cited for the incident. The Philadelphia Police Department reported no injuries to civilians or damaged property from the protest, and said the disruption to the parade was only temporary.

Protest organizer Lizzie Horne said she was happy with the turnout, as the event had only been advertised on social media a few days prior. More protests are in the works from Never Again Action.

“This moment is imperative to be doing this work, and folks aren’t ready to be celebrating freedom on the Fourth of July when so many people living here don’t have the same types of freedom,” Horne said. “We are here as a group of Jews, differently affiliated, to come together and say never again means never again for anyone.” 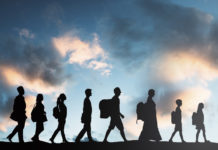 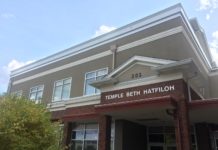 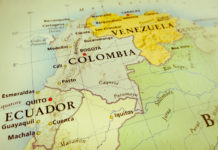