I always thought of radicchio as a small, red, crisp, pleasantly bitter lettuce. This notion was smashed last week at the farmers market when I encountered a long, lean, romaine-looking head of lettuce that was labeled “radicchio.”

I inquired of the farmer, and he explained that this was a varietal of radicchio that tastes more or less the same, but has a different shape and color. I took home a large head, and the rest is history.

The farmer recommended grilling the virtus, which I did (see below), but I also used it to round out a Caesar when my romaine ran short and an extra guest showed up for dinner. It added a welcome bite to the otherwise mild romaine.

And later in the week, it served as a crunchy bed for my tuna salad lunch: I chopped the lettuce coarsely, tossed it with a few cherry tomatoes and sliced cucumbers, drizzled it with olive oil and apple cider vinegar, sprinkled it with salt and pepper, and scooped a dollop of tuna salad on top. Healthy and tasty midday meal for me.

Grilled salad was uber-trendy about a decade ago — it seemed like every new restaurant offered a charred Caesar with varying degrees of success. Everything in moderation, I say (with the exception of in season tomatoes and peaches).

This preparation works for any lettuce, but the more robust varietals hold up better. Lean more toward endive and escarole, not so much toward Boston and butter.

The version here is the most basic version, but feel free to round it out with other grilled veggies or fruits, or a drizzle of aged balsamic to add sweetness as a balance to the sharp flavor of the lettuce.

Wash the lettuce and drain it on a towel. Cut the head vertically.

Brush the cut side of the lettuce with olive oil and sprinkle it generously with salt and pepper.

Heat a grill, and place the cut side of the lettuce face down on the surface. Sear, and rotate the lettuce 90 degrees to make hash marks.

Lower the heat, and cook the lettuce for about 5 minutes.

Serve hot or at room temperature, plain or drizzled with your favorite dressing. 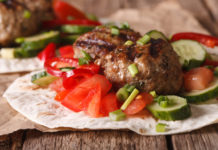 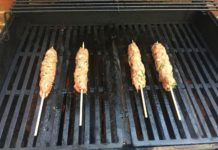 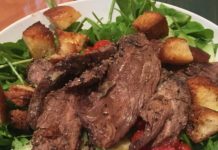