Sharon Levin, head of school at the Jack M. Barrack Hebrew Academy, wanted this year’s gala to be about the big themes.

Jewish day schools, she knew, are at a critical juncture, as fewer Jews are choosing to participate in organized communal life the way their parents did, and Israel, once a unifying force among American Jews, now represents division within the community. A keynote speaker, she figured, would have to be someone who’d been around the Jewish block, so to speak.

And who better than Malcolm Hoenlein, executive vice chairman of the Conference of Presidents of Major American Jewish Organizations, since 1986? And a Philadelphian with degrees from Temple University and the University of Pennsylvania? C’mon.

“At over 30 years in his position, he has had his finger on the pulse of so many Jewish organizations,” Levin said. “He has seen the full picture.”

Hoenlein will speak at the 17th annual gala, which will honor Len and Lynne Barrack, whose gift in 2007 preceded the change from Akiba Hebrew Academy to the school’s present name. The gala will be held at the Hilton on City Avenue on May 15.

“It was the time to honor them,” Levin said of the Barracks. “I was so thrilled they said yes, because, believe it or not, we’ve approached them before, and they’ve said, ‘We don’t need this, we don’t want this.’”

This year’s theme, Levin said, is “Israel in our hearts and in our minds.”

Levin and the administration will use the gala as an opportunity to make a key announcement about the future of the school: the establishment of a position tasked with developing an Israel curriculum. The bulk of that education has been undertaken by Jewish studies and history teachers, with gaps filled in by the Alexander Muss High School in Israel program attended by the majority of the junior class.

Now, Levin said, the school wants to devote more resources, manpower and, most importantly, time, to studying modern-day Israel. The hope is that students who may have once left Barrack without learning much about the Jewish state after its founding will instead go to college campuses, which grow increasingly hostile to Israel each year, with a fuller understanding of the Palestinians, inter-Israeli issues relating to religiosity and governance and other hot-button topics.

There will also be a new initiative to better subsidize those students attending the Muss program, Levin said.

Students at Barrack, Levin said, “have to have developed a deep connection to Israel, and a love of Israel,” whether through lectures or experiential learning.

Seniors, whose spring semesters typically consist of a few mandatory lectures along with a manageable load of required service hours, will now be asked to attend seminars that will better prepare them to discuss Israel and Jewish issues on campus.

Few people have been as involved with thinking about and working to solve such problems as Hoenlein, whose activism dates to his campus days, when he founded the North American Jewish Students Network, not to mention his extensive work with Soviet Jewry.

“This is of special significance to me because I am a native Philadelphian,” he said, “and I know of the great work that the Barrack family has done, both in regards to the school and as well as other important charitable engagements. And now, with the events of the past year underscore the importance of what the Barrack school had done in terms of educating their students regarding Israel, the history, the issues, providing them with Israel experiences that few schools do, and to frankly to underscore the importance of Jewish education today.”

Hoenlein gave a brief preview of his speech.

“I will try to give them an assessment of where we are today as American Jews and also a bit about world Jewry in terms of the evolving challenges, including anti-Semitism, anti-Zionism, anti-Israelism and the nature of the challenge to us,” he said. “We have to face the reality of things that people never anticipated would happen in America. We saw it in Europe, and people would say, ‘Well, it was over there, not here.’ Now it’s here.” 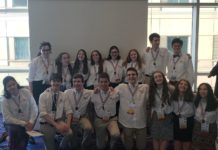 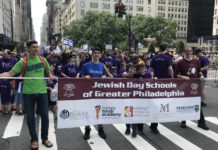