On a recent trip to Argentina, I had the good fortune to encounter the celebrated restaurant Mishiguene.

The restaurant’s philosophy is based on the fact that for the past two millennia, Jews have established roots all over the world. They often landed in their new homes with little more than hope, adapted their ancestral recipes to locally available ingredients and established a truly global cuisine.

Located in the trendy Palermo neighborhood, Mishiguene is the brainchild of Executive Chef Tomas Kalika and CEO Javier Ickowicz.

Kalika hails from Jerusalem, where he spent his formative years, then cooked the world over for two decades. Ickowicz is a Porteno (a Buenos Aires native), who founded the prestige pastry brand NUCHA with his mother. Together, Kalika and Ickowicz created what they call “the first avante-garde Jewish restaurant.” 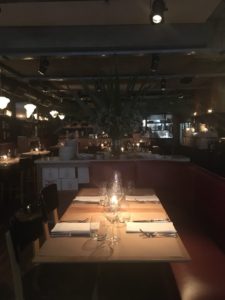 Like all Argentine restaurants, Mishiguene opens late by American standards — our reservation was for 7:30 p.m., and we were the first guests to arrive as the hostess opened the door. We were greeted warmly with the soundtrack of klezmer music, and began to peruse the menu, which spans the culture of the Diaspora. Our trio was advised to order two small plates and one large plate, which was difficult as there were multiple items we found tempting. Our server spoke excellent English (which is not a given in Buenos Aires) and made an excellent recommendation for a Mendozan malbec.

As soon as we ordered, the “Jewish bread selection” arrived gratis. This comprised a bagel, a slice of raisin challah and a pita, accompanied by a jar of sweet and sour pickles, a puree of oniony schmaltz and a bottle of locally pressed olive oil.

The texture of the breads differed significantly from American versions of the same — the bagel in particular was very soft — but we enjoyed them all regardless.

Another pleasant surprise was the quality of the Argentine olive oil; it was as good as any fruity, high-quality Italian, Greek or Spanish version I’ve tasted — not surprising given the climate, which is hospitable for wines and, logically, olives, but until last week I had never considered Argentine olive oil.

For starters, we chose the boreka, a savory pastry filled with goat cheese and topped with sesame seeds, greens and a poached egg. We also ordered the baba ghanoush, which was a deconstructed version of the Middle Eastern dip; charred eggplants formed a bed for a puree of cooked, well-seasoned eggplant, tahini, fresh parsley, dill, olive and a wedge of lime.

For our main, we split the “pastron,” which we were informed was the signature dish of Mishiguene. It is a brick-sized slab of pastrami, served atop a latke and, again, topped with an egg. (Full disclosure, I could have done without the egg toppers, which seemed to add an overabundance of heft to already hearty, heavy dishes, but my daughter loved them and gladly skimmed them off the dishes before I dug in.)

The preparation of the pastron, if my translation is correct, involved a sous vide — a vacuum seal of the food, which is then cooked in a precisely controlled water bath.

The good news was the resulting tender, well-flavored uniform hunk of pastrami. For purists, however, the results were a bit too tender; pastrami should bring a bit of welcome meaty chewiness. Mishiguene’s version was ever so soft that it had a hint of the texture of pate. This was undoubtedly mission accomplished for the chefs, who are aiming for haute cuisine, but I could not quite wrap my head around the mouthfeel. The latke, however, was perfect.

Desserts were gussied up versions of traditional Jewish sweets, as well as some creative creations based on local fruits.

We tried the baklava, which arrived as cigarette rolls of pastry, nuts and honey perched atop a bed of sweetened cream cheese and garnished with vanilla ice cream. The “huerta de Katy,” which translates to “Katy’s acre,” offered a mélange of seasonal, local fruits — berries, cherries, plums, oranges and kiwi — on a bed of chocolate, with a scoop of raspberry ice cream, leaves of pastry and a few mint leaves.

Serves two as a meal, or more as a shared appetizer

This melted cheese dish is ubiquitous in Argentine restaurants. Served as an appetizer, it is similar to Mexican queso fundido, Swiss fondue or Greek saganaki. The bubbling cheese comes to the table in a cast-iron skillet accompanied by a selection of breads; what’s not to like?

A note on the cheese: Mild provolone is the preferred choice; it melts beautifully and does not compete with any herbs or seasonings you may want to add.

I also tried this recipe with sharp provolone, which did not work as well. As the sharp cheese melted, it gave off a lot of oil, which I had to drain for the cheese to brown properly. Additionally, the sharpness competed with the oregano and pepper flakes, and the texture became hard rather quickly; it did not hold that gooey melt. Go with the mild; it works better, is cheaper and is easy to find in any supermarket.

This was lovely served with bread and salad as a light supper. 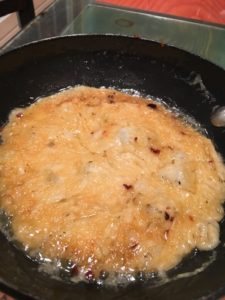