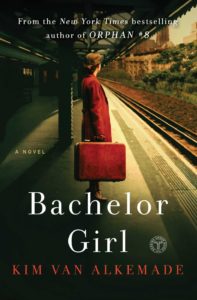 Sitting in a room of relatives and close friends of the late Col. Jacob Ruppert in 1939, Helen Winthrope, a washed-up, unknown actress, was surprised to hear her name read aloud during his will.

But more so, she was surprised to learn that she inherited the bulk of the New York Yankees owner’s fortune.

Riddled with scandal, the press was quick to suggest she was his mistress, though Bachelor Girl explains Helen’s connections with the millionaire beginning far back into her childhood.

The novel details this relationship from 1918 onward, in an era that encompasses two World Wars, prohibition, racism and the Great Depression.

Helen, a young 20-something living with her mother, declares herself a “Bachelor Girl.” She wishes she could be like other women who are independent and self-sufficient like the title suggests, but a botched abortion leaves her barren — and barring a secret for the rest of her life that would cast her an outsider in society.

She becomes acquainted with Ruppert’s personal secretary, Albert Kramer, who also holds a deeper secret: He is gay, though he only shows his “pansy” side — as the 20th-century setting refers to it — to other close gay friends.

Unable to be what society suggests of both of them, Helen and Albert form the perfect couple, aside from the obvious passion their intertwined lives will never experience. Their friendship — including Ruppert’s — refutes the quintessential notion of love in most stories of relationships depicted in this era.

Even further, the most interesting side of the novel is Albert, who is constantly going back and forth between wanting to pass as straight and falling back into the arms of his male suitors.

Alkemade’s portrayal of the history of gay subculture — as well as people of color — in New York City in the ’20s is both fascinating and frightening. Albert and many others often risked it all to just feel a sliver of their true selves. In the novel, it took years for Albert to accept what he is, while other gay men he encounters still refer to themselves as abnormal, damaged or of a perverse condition.

Only until after Ruppert’s death are more decades-kept secrets revealed, forcing Helen and Albert to confront the truth about their relationship.

Alkemade takes the real-life persona of Ruppert as inspiration, creating a fictional story around his million-dollar bequest to a young unknown actress.

While some of his history is true — Ruppert was a lifelong bachelor, but more well known for establishing Yankee Stadium and acquiring Babe Ruth — Alkemade creates a world surrounding these few simple facts.

The novel alternates each chapter in narration between Helen and Albert, picking up right where the other left off, but obviously from a completely different standpoint.

Bachelor Girl fits well into a hefty read today, contrasting — or sadly, complementing — gay, women’s and civil rights to those of the 21st century.

Intertwined in all of the history are small Jewish themes, like talks of Germany during World War II. But more apparent is the Orphaned Hebrews Home, the land of which Ruppert is interested in acquiring to build Yankee Stadium.

The orphanage is run by Felix Stern, who attempts to grow closer and closer to Ruppert’s personal secretary — Albert — for reasons much more personal than the purchase of the property.

Bachelor Girl explores a different side of sexuality during a time when it was clearly not accepted — even by the people claiming themselves to be anything other than straight. Intertwined with the real history, the novel is a great read that goes beyond the typical premise of romantic relationships between a man and a woman.