As Israel prepares to turn 70, stories of modern-day Israelis and the struggles they — and the country itself — have faced can be seen on screen during the upcoming Israeli Film Festival of Philadelphia (IFF).

The festival, celebrating its own 22nd birthday, kicks off March 3 with a screening of Maktub at the International House in University City. It follows two partners-in-crime who survive a suicide bombing and wind up fulfilling the wishes of those leaving notes at the Wailing Wall.

While that sounds dramatic, it should be noted that it is a slapstick comedy.

“We always like to start out the festival — we try — with something a little lighthearted,” said Mindy Chriqui, IFF artistic director, adding the film is “just plain funny.”

The festival runs through March 25 with everything from documentaries to feature films across multiple genres — romance, tragedy, comedy, thriller — all the while showcasing the struggles and triumphs of everyday Israelis.

There’s Beneath the Silence about a man battling post-traumatic stress disorder six years after returning from the Six-Day War. Or An Israeli Love Story, a love affair between a drama student and a man helping the Palmach smuggle Holocaust survivors into Palestine in 1947, which is based on a true story.

For Chriqui, the opportunity to showcase these stories is a way of altering people’s perceptions of Israel, which usually brings to mind buzzwords like “terrorism” and “conflict.”

“These films really get to the heart of what it’s like to be an Israeli,” she said. “Not that they are films that show ordinary lives, but they do show how Israelis live their lives as best they can under their circumstances. … They just want to show their truth, however beautiful or painful it is.”

The films will be screened in various vicinities in Center City as well as outside of city limits to better reach audiences.

Documentary Ben Gurion, Epilogue, for instance, will play on March 6 at Uptown! Knauer Performing Arts in West Chester in partnership with the Kehillah of Chester County.

If there is one film Chriqui is most looking forward to, it would be Scaffolding, a coming-of-age story about an impulsive 17-year-old battling between what his strict father wants for him in taking over the family scaffolding business and what he wants for himself. It will screen at the Bryn Mawr Film Institute on March 11.

But mostly she’s looking forward to audiences getting to see the films.

“We know by now that we’ve established ourselves as an entity now in Philadelphia, especially with the Jewish community, and people want to come see Israeli films, which is absolutely marvelous,” she said. “Every year brings its own kind of magic.”

And while there isn’t necessarily a theme for the festival, those who are musically inclined will enjoy a day at the Kimmel Center for the Performing Arts on March 18 for screenings of A Quiet Heart, which follows a young classically trained pianist who moves to Jerusalem to escape the pressure of her life in Tel Aviv, as well as Itzhak, a documentary about acclaimed violinist Itzhak Perlman.

The latter film gives a glimpse into the life of one of the most celebrated and talented violinists of our time, with footage from concerts — both classical and not-so-classical as he accompanies Billy Joel on stage for a rousing rendition of “We Didn’t Start the Fire” — to Shabbat dinners with his family in New York City.

For director and filmmaker Alison Chernick, Itzhak, at its core, is a story about overcoming adversity.

Using archival footage — such as his appearance on The Ed Sullivan Show when he was 13 — in addition to scenes from Perlman’s life today, Chernick traces the musician’s journey battling polio at 3 or 4 and discovering his early love for violin, as well as the challenges he faced as he sought to pursue the instrument while many only saw his disability. It also integrates his family’s emigration from Poland to Israel and his life there growing up.

“These were obvious pivotal moments we wanted to capture, but we didn’t want to go too deep into history as it was a vérité film about him today,” Chernick noted. “It was this process of weaving this quilt, let’s say, throughout the film of important moments in his life.”

Just as vibrant a character as Perlman is his wife of 50 years, Toby.

“We traveled a lot together, so it was great to have Itzhak and Toby as role models and to watch them teach other students,” said Chernick, who accompanied them to Jerusalem — where Chernick herself studied in the ’90s — as he accepted a prize and visited a violin dealer in Tel Aviv, “and just the message that they sort of have in the world and what their priorities are and what incredible people they are.”

Through the film, the viewer gets to know Perlman on a more personal level aside from his many, many, many accolades. His sense of humor, Chernick noted, particularly stood out.

“He’s a wonderfully understanding subject who was amenable for the most part and happy to go along for the ride. By the end, he started to miss the camera,” Chernick laughed.

“He’s so much a role model for the next generation,” she added. “He cares about goodness in the world and that’s what he teaches his students, that … it’s about self-exploration and well-roundedness and being the best person that you can be and not looking at what people can’t do but looking at what they can do, and being a fair, equal person. He’s very much glass half full.”

Between quiet moments of him and Toby walking their dogs to wine-infused dinners with Alan Alda, there were many moments in Itzhak — which will also play a weeklong engagement at Ritz at the Bourse starting April 20 — that stood out to Chernick in making the film.

“It was really a dream to make this film,” she said. “People hear his music and it resonates in a way that is just incredibly moving for people, and I think what they’re actually hearing is all the wealth of compassion and empathy that he has in his heart — and that doesn’t just come from technique.” 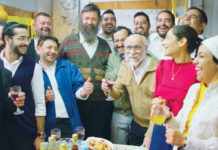